There are just too many dogs to help and too many families overwhelmed, said Drew Warner, lead trainer at Canine Solutions.

“Dog owners are frustrated and at their wit’s end because they can’t find the support they need to help them with their new family member. There just aren’t enough supports in place to help every dog owner.

“Overall, I think the pandemic has been hard on dogs and trainers. Its like a baby boom, but its essentially a dog boom.”

Rescued dogs are being shipped to B.C., sight unseen by their prospective new owners, from all over the world, he said.

“This leads to issues where I’ve seen clients have to return dogs that were entirely the wrong match for their family and what they need,” said Warner.

If you go to a breeder, people are paying, sight unseen, as much as $4,000 for a trendy Bernedoodle or a French bulldog.

For those who did get a dog for companionship during the pandemic, it’s likely all the animal knows is being with its human 24/7. This is a recipe for depression once the human goes back to work.

“A lot of people got a dog for an emotional need, which down the road if you’re using a dog for your emotional needs you’re not meeting your dog’s needs and that can cause problems,” Warner said.

See your dog as a dog, in other words, and not as just a cuddle bunny.

They need to be taught their human will return, that the world will not end when he or she leaves the room. And part of that training is to leave your dog alone for periods even when it’s in the same room as you, said Warner.

“Get the dog in another part of the room and don’t let it follow you, just start there.”

“Giving your dog its own space to have its own experience is huge. If you’re returning to some type of office lifestyle, you’re not going to do that successfully if you haven’t spent time away from your dog leading up to that.

“I see this as a massive problem for folks who have gotten puppies and haven’t done this.” 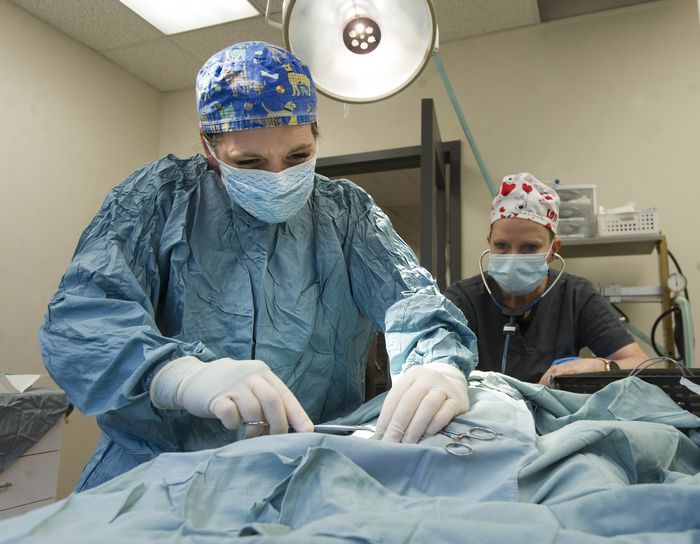 The influx of pandemic puppies also means long waits to get in to see a vet, and the job of veterinarian or vet’s technician was already tough enough: The profession suffers significantly more suicide than the general population.

Add pandemic health protocols and you’ve got busier pet clinics, fewer staff as workers stay home if they display any symptoms, even if it’s probably just allergies, and more animals to see than ever.

“Everyone got a dog,” said Dr. Paula Bedford, a veterinarian who owns Maple Ridge Animal Hospital. “And if they didn’t, they at least spent more time with their own and found problems they have never seen before.”

Her practice has had to stop taking new clients, and the appointment book for existing clients is backed way up because the clinic had to shut completely for a time last year when everything else did, and they’re still playing catch-up.

“One day by 9 a.m. we had turned away eight people,” said Bedford. “I’d say on an average day we turn away 20 people per day and a lot of them had called the other practices in town already. There just aren’t any openings.”

Her next opening for a dental job on a dog, for instance, is in mid-June.

“Anything routine is getting pushed way out.”

The surprising science behind happy cats

Animal behaviourist Zazie Todd on how happy cats communicate with humans, their petting 'time limit' and why they tend to gravitate to the one person in the room who's not interested.

#Ask Alyson: The kids promised to walk our pandemic puppy

One of the most effective ways to get your kids to take care of their responsibilities is to move away from discipline to acknowledging there is a problem in the family that needs solving.

Turtles and crocodiles are especially at risk, according to researchers who say there's been a lot more focus on the furry or feathery species of vertebrates for conservation.

Tail-chasing, humping, licking: When your dog needs a vet

Dogs do a lot of odd things, but compulsive, repetitive behaviour may be a sign of skin irritation or pain.

Should you worry about bird flu?

Since last December, cases of avian flu have been rising steadily across Canada, the U.S., and much of the rest of the world.