This story was created by Content Works, Postmedia’s commercial content division, on behalf of a client.
Sponsored by a research based pharmaceutical company

Lindsay Rous, a Calgary high-school teacher and outdoor enthusiast, has a very active lifestyle. Only very occasionally does having Crohn’s disease slow her down at all.

“Even when I was very symptomatic, I went to work every day,” says the 34-year-old science and leadership teacher. “I think I took one day off, hoping I might get better. It didn’t help, so from then on, I just kept going to work despite symptoms.”

“I have missed playing a couple of soccer games because of not feeling well, which is frustrating,” she adds. “And my husband and I once decided not to go on a canoe trip we had planned because I was unwell, but, by and large, I try to carry on.”

Her introduction to Crohn’s, an autoimmune condition characterized by chronic inflammation of the intestines, came during her university years, she recalls.

“I first started having problems in 2005 and used to talk about my 10-minute sickness. I was in a lot of pain about twice a day, but if I sat on a bench for about 10 minutes and then kept moving or walking afterwards, the pain would go away.”

When the symptoms became more frequent and intense, she sought medical help. “It was about a year before I was diagnosed with Crohn’s,” she says. “That was a very frustrating year, because I was quite sick at some points.”

After receiving the diagnosis and suffering a major flareup, Rous was prescribed a treatment, which kept the disease stable for more than five years. 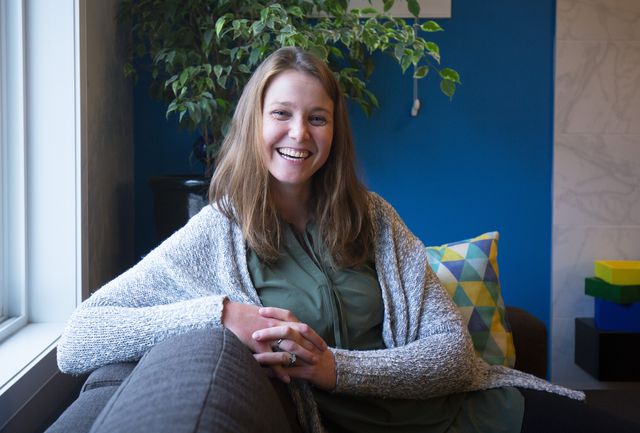 “Essentially, I had no symptoms and felt completely fine,” says Rous, by this time a resident of Calgary and under the care of Dr. Cynthia Seow of the University of Calgary’s Division of Gastroenterology and Hepatology in the Department of Medicine. “I talked with Dr. Seow about stopping all medications” says Rous. “Then, I had a colonoscopy and even though I had no symptoms, it seemed that I still had the disease.” While Rous was feeling well, her tests continued to show inflammation, worrying Dr. Seow.

Pointing out that feeling better is only part of the solution in the case of chronic diseases such as Crohn’s, Dr. Seow emphasizes that it is important “to stay ahead of the game and optimize therapy with the goal of long term overall remission. That means embracing approaches that include both the absence of symptoms as well normalizing indicators of health such as blood tests, endoscopy and radiology tests.

“Symptoms don’t necessarily correlate with disease activity, and that is particularly true with Crohn’s disease,” warns Dr. Seow. “Even if a patient has no symptoms, if there is ongoing evidence of inflammation on tests, this will likely predict a disease flare in the short term.”

Dr. Seow emphasizes that, as part of treating to target, it is essential to optimize a patient’s treatment. Occasionally a therapy is ineffective despite optimization of the initial agent, or a patient has a significant adverse effect to the medication. In these cases, it may warrant a medically necessary switch in therapy. “Now, we test for inflammation. If we find something abnormal, we can pounce on it right away. Tight control and treating to target can really change a patient’s outcome.”

Rous required repeated attempts to find a suitable therapy since multiple treatments were ineffective for her. Fortunately, there are many IBD treatments to allow options for Rous and Dr. Seow to choose from. The relationship between physician and patient in any decision involving a treatment change is important, according to Dr. Seow, “especially in this case when treatment failures have taken place in a very short time.”

“Now, I have been on another therapy for the last four months and it feels like it’s working,” says Rous. Since the effectiveness of a therapy can vary from patient to patient and as time passes, it is important for patients and their doctors to have as many options as possible to treat disease. “When I felt okay, I didn’t understand how complicated managing my Crohn’s was… now I understand.”

As the journey to regain stability continues, the important decision making between the patient and their physician will remain a cornerstone.

All treatment options have benefits and risks which vary by the individual. Determination of the most appropriate treatment should be made in consultation between a patient and their doctor

This story was created by Content Works, Postmedia’s commercial content division, on behalf of a research based pharmaceutical company

Growing up with dogs — but not cats — may help protect against against inflammatory bowel disease, according to a new study.

Dating is already hard. Add a chronic illness to the mix, and well, it can be hell.

Should you be worried about your poo?

From size to colour, your stool says a lot about you.

Researchers find that stress hormones suppress the part of the immune system that normally protects the gut from invasive bacteria that has been linked to Crohn's disease.

Study may have solved the mystery of IBS trigger foods

Researchers pinpointed the mechanism that connects specific foods with the activation of histamine-producing cells.