Wildly varying uptake for pediatric COVID-19 vaccines across Calgary shows the province’s rollout of the shots has been inequitable, community leaders say.

The trend is also seen in Edmonton, where pediatric vaccine rates sit at 63.4 per cent in Edmonton Twin Brooks, compared to only 20.7 per cent in the city’s Abbotsfield region.

Dr. Gabriel Fabreau, a general internist and assistant professor at the University of Calgary who works in northeast Calgary, said he worries low immunization rates among children will contribute to widespread transmission within schools, which reopened Monday, and increase risk of negative health outcomes.

“It’s a hard problem, because kids need to be in school. . . I 100 per cent agree with sending them, but I think that Omicron is so infectious, and it’s in the air, that we have to do as much as we possibly can to reduce the spread in schools,” Fabreau said. He cited a recent Journal of the American Medical Association study which found one dose of vaccine can reduce risk of MIS-C by 91 per cent, with shots helping to protect children from the rare but serious inflammatory condition which can occur after a COVID-19 infection.

“The proportion of kids that will be very, very sick is going to be low, hopefully, still. But a very small number of a huge number is still a lot, and every case of MIS-C that can be prevented should be.” 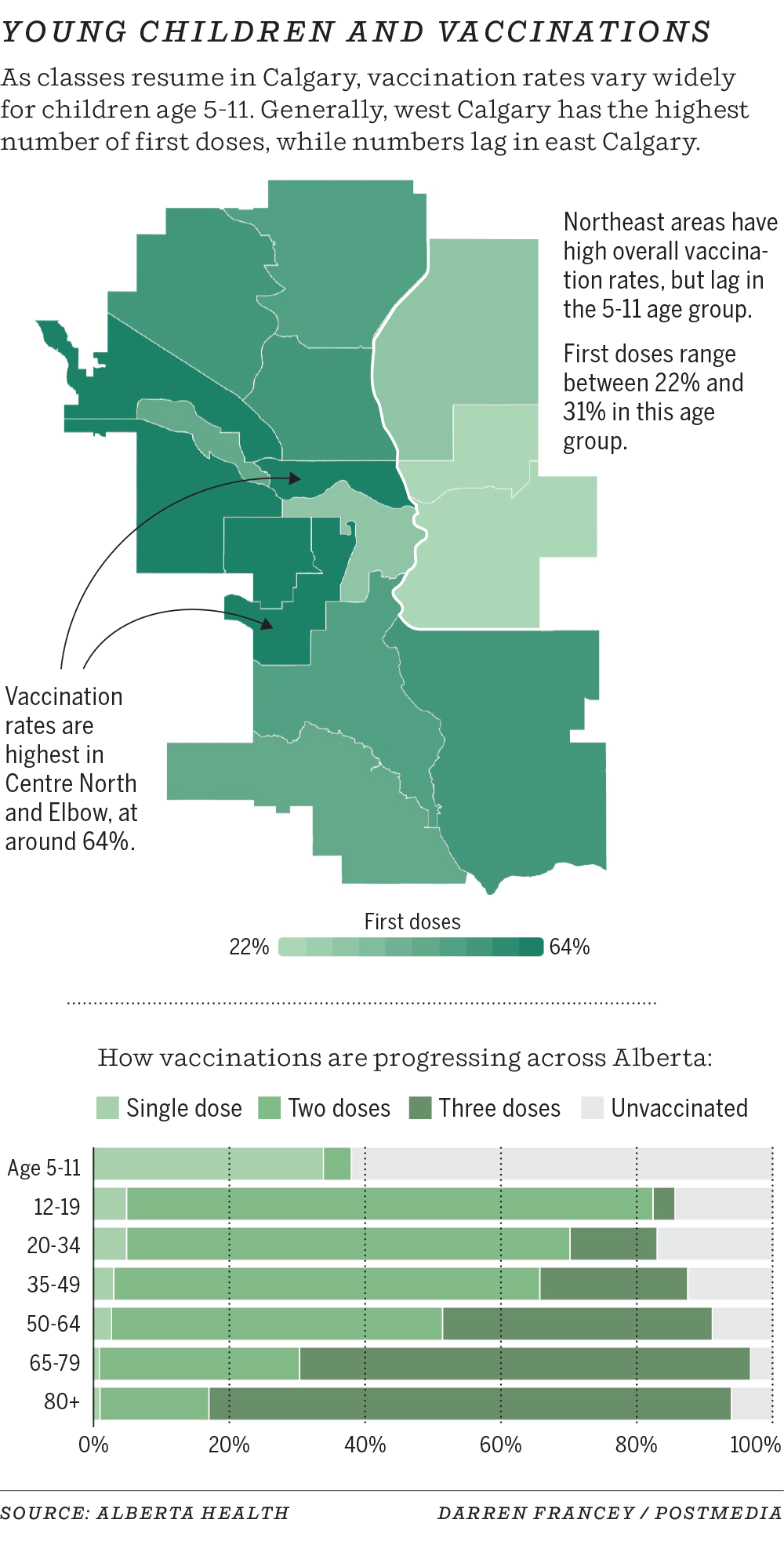 The areas in Calgary lagging behind on pediatric vaccine uptake have high rates of immunization for the adult population, including the upper northeast, which has one of the highest vaccine coverage rates not only in Alberta, but across Canada.

That success story came together thanks to the work of more than 200 community organizations in a grassroots effort, led by several key organizers, including Centre for Newcomers CEO Anila Lee Yuen.

But Lee Yuen said community leaders knew the pediatric vaccination concerns were “going to happen” and that rates in the city’s east would trail other areas of the city when rollout of shots for children began, due to the limited scope of clinics providing the special Pfizer doses. The shots are only available at a handful of Alberta Health Services clinics in Calgary, including a single location in the city’s northeast quadrant.

“We’ve been able to prove that this is not vaccine hesitancy, with a 99 per cent vaccination rate in northeast Calgary,” Lee Yuen said. “It’s about barriers and accessibility. We had to work really hard, we had to lobby, we had to do everything we could to ensure those barriers were removed.

The most straightforward way for public health officials to bridge the gap on immunizations would be to bring immunization clinics to schools, Fabreau argued.

It’s possible for Calgary’s diverse northeast communities to once again rise to the challenge during the pandemic and achieve a high immunization rate among children, Lee Yuen said.

But she said that requires a greater commitment from government officials, including financial resources.

“We can do this again. We just need those barriers to be lifted,” Lee Yuen said.

“At the organizations that worked together last time to ensure we were able to get adults fully vaccinated, there’s no funding to be able to assist this time around. There’s no resources being put in to help that community engagement happen.”