Calgary’s public and separate school districts have purchased N95 masks for school-based staff as they face unprecedented absentee rates, with some institutions still waiting for face coverings and rapid tests promised by the province.

But critics say even those additional supplies won’t be enough to keep schools open unless the province takes more action, such as providing N95s for all students and staff, putting HEPA filters in all classrooms and addressing low vaccination rates among school-aged children.

As Omicron cases continue to surge across the province, pediatric hospitalization rates are also rising, with an additional 25 hospital admissions among Albertans under the age of 19 since schools opened Monday.

At the Calgary Board of Education, officials have ordered thousands of N95 masks for school-based staff, with the intention of purchasing more if Omicron continues its rapid surge.

“We anticipate this supply to last for approximately four weeks. More masks may be acquired based on usage and ongoing case counts.”

The Calgary Catholic School District also confirmed it will purchase N95 masks for school staff after the board of trustees voted in favour of the move at its meeting late Wednesday.

The province has said up to 8.6 million rapid test kits and 16.5 million medical-grade masks, which are not N95s, will be delivered in a series of shipments over the next month, the first of which was promised to arrive by Friday at the latest.

At the same time, both Calgary school districts are facing rising absentee rates among students and staff as numbers rose again Thursday.

Those numbers are another increase from Wednesday, when 1,289 CBE staff were absent and the student absence rate for CBE students in K-12 was 19 per cent. Three schools have seven classes that are now learning from home. 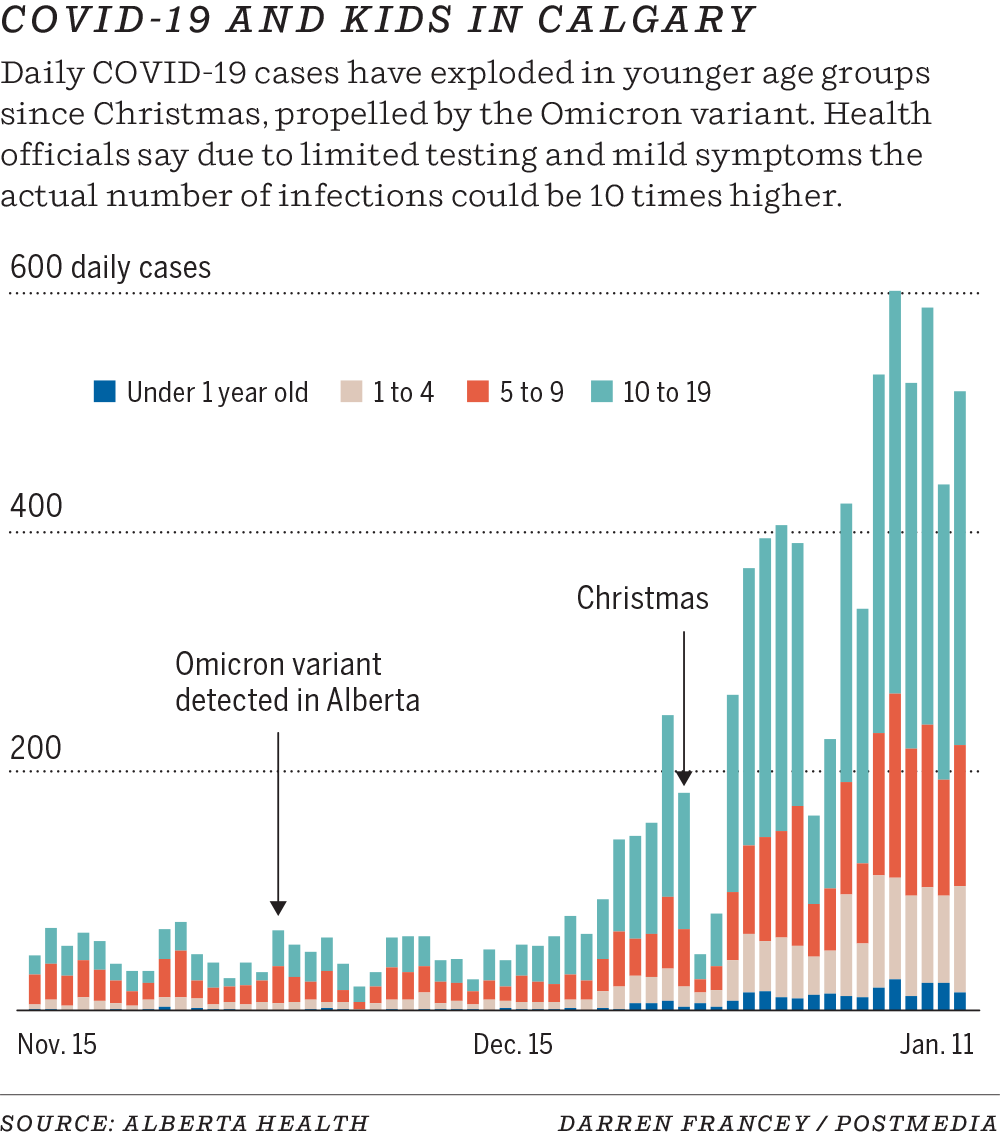 At the CCSD, 129 staff were on public health leave Thursday, up from 102 on Wednesday, and two classes are learning from home.

CCSD added the district has received all of its adult and child-sized masks from the province, but is still in the process of delivering some from its distribution centre to schools.

Some rapid test kits have also been received and are being distributed to schools with special-needs students, and will then move on to elementary schools, junior highs and then high schools.

Officials with the CBE could not confirm how many of its schools have received supplies so far, but did say some have begun arriving.

Members of the Opposition NDP held a news conference Thursday demanding the province address the huge challenges schools and families are facing this week by taking more specific action to increase safety.

“Like many Albertans, I have watched the situation in our K-12 schools deteriorate quickly over the past four days,” said NDP MLA David Eggen.

“As a parent and as a former classroom teacher, my heart goes out to all of the students, staff and families who are under incredible stress right now. It is difficult to focus on learning when your classmates or your teacher are suddenly vanishing.”

Eggen outlined a “package of protections” that he argued would cost “substantially less than the $600 million of the education budget the UCP withheld from classrooms last year.”

Those protections include providing N95 masks for all students and staff, HEPA filters in all classrooms and increased funding for more staff, including mental-health counsellors.

Premier Jason Kenney said the province won’t be looking to put vaccination clinics in schools, saying when it was attempted for older students in the fall the uptake was very low.

“There was negligible uptake when we set up those clinics in schools, but it sucked up a lot of resources to staff those clinics for almost no demand,” Kenney said.

“So this appears to be reflective of a decision that a lot of parents are making.”

The sizzle of eye contact: Are masks increasing intimacy?

Experiments that have shown people can fall in love just by staring into each other's eyes raises the possibility that pandemic face-coverings are helping us make deeper connections.

If you ask public health experts their advice on whether or not purposely getting COVID is a good idea, the answer is a resounding no.

They found that people with depression were 2.2 times more likely to endorse misinformation about the vaccines.

Tuberculosis is making a comeback as Nunavut battles the infectious disease

TB is 290 times higher among Inuit than non-Indigenous Canadian people, a number that's growing as the lack of COVID-19 vaccines pushes communities into poverty.

Myocarditis: COVID-19 is a much bigger risk to the heart than vaccination

Adults who develop myocarditis from COVID-19 have poorer outcomes than non-COVID-19 cases, including a higher risk of death.