Daniel Desjardins, who has Down syndrome, has spent much of the pandemic inside his apartment, alone.

His parents are the only people he’s interacted with for months after they made the difficult decision to cancel visits with his support worker to reduce his exposure.

Desjardins typically only goes outside to get fresh air, but he sees people walking around without masks and says it can be hard to keep distance from them. After seeing his parents get the vaccine recently he wants to know when it’s his turn.

Desjardins is one of several Albertans with disabilities who, along with their families, approached Postmedia through Groundwork, the Edmonton Journal’s pilot project in engagement journalism, and want to know when they’ll be getting the COVID-19 vaccine.

Alberta’s vaccine plans so far only include information for people with disabilities in group homes. They are part of group C, which includes residents and staff of congregate settings and are expected to receive shots between April and June after groups A and B have finished.

Group B includes Albertans 18-64 with high-risk underlying health conditions, but what conditions are included hasn’t been released. 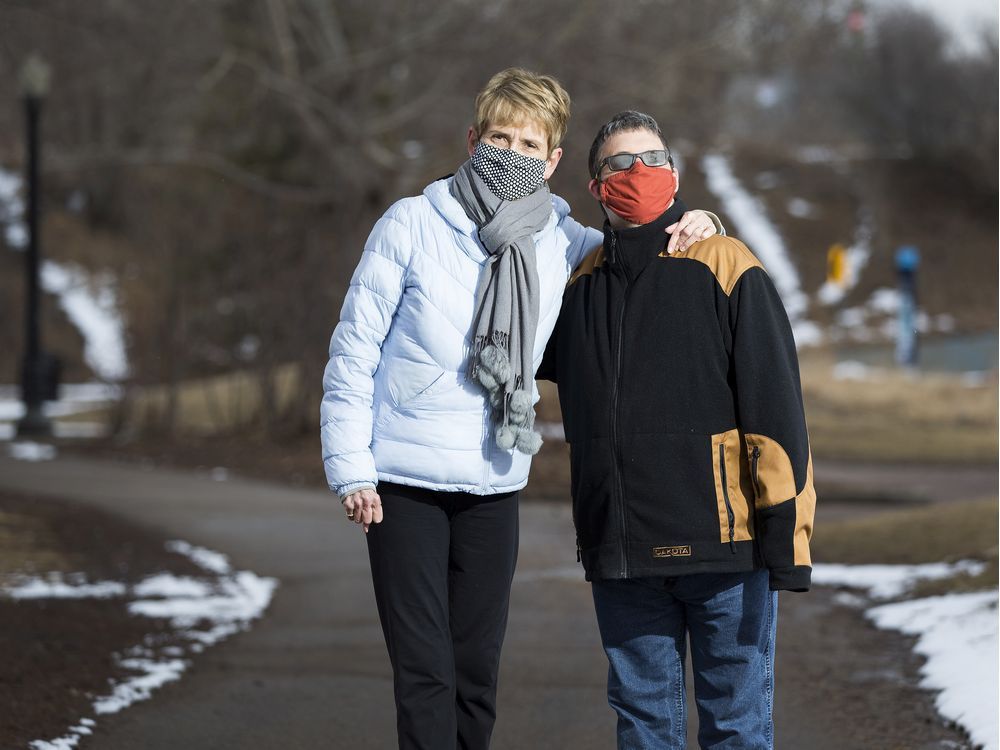 Fears of COVID-19 particularly makes sense for Desjardins because research shows people with Down syndrome have worse outcomes.

Donna Desjardins says she and her husband have hardly slept in the past few months, worrying about their son because of the risk. They want to know if he and others with developmental disabilities will be part of Group B.

“I was living in fear of what happens if something happens to us, and Daniel has nobody to care for him? Or what happens if Daniel catches COVID? It’s a black place to be,” she says.

If her son is included she says they will be thrilled and relieved.

“The reassurance that we would get of knowing that there’s going to be an end for this is really needed right now.”

Daniel Desjardins hopes he will get the COVID-19 vaccine soon. He says he will feel “happier to see my family again,” including his brother “because I miss them.”

Katherine Van Hoof’s brother Raymond Touw has Down syndrome and lives at a group home that had a COVID-19 outbreak in June. She says three of the four residents at Good Samaritan Westpark group home, including her brother, were infected.

She’s glad to see group homes on the list but thinks they should have been included at the same time as long-term care residents, who started getting vaccines in January.

“Just like people didn’t think about seniors’ facilities until the death rates started going up … and I think it’s the same with disabled people, even more so,” she said. “I think this is just the government overlooking these people because they don’t have much of a voice.”

Alberta Health spokesman Tom McMillan said in an email Tuesday the government wants to be able to give vaccines to all Albertans with disabilities as soon as possible and work on this list is underway.

“We absolutely recognize that Albertans with disabilities would benefit significantly from the vaccine. As you note, individuals with Down syndrome and others can face higher risks of severe outcomes,” he said.

Inclusion Alberta CEO Trish Bowman says impacts on people with disabilities have been considered last, if they are even considered at all, during the pandemic.

For example, early hospital COVID-19 protocols made patients go in alone, meaning people with developmental disabilities couldn’t bring a support person to help them communicate and understand what was happening.

People with intellectual and developmental disabilities in particular need to be considered in vaccine planning, she says.

“We just really want to make sure (disabilities are) front and centre,” she says. “It’s kind of been the experience all along … this seems like another example, it doesn’t seem to be part of the public discourse.”

People with some developmental disabilities also may not be able to properly wear a mask or physically distance, making them more exposed, she says.

“They need to be considering (research and evidence) in terms of protecting Albertans that are most vulnerable to severe outcomes.”

Other disabilities have risks

People with different kinds of disabilities and health conditions are being prioritized in vaccination plans in other jurisdictions.

In Maryland, people with intellectual and developmental disabilities can get vaccines right now. Detroit residents with cerebral palsy, autism, Down’s Syndrome, muscular dystrophy, Tourette’s syndrome, ADHD, spina bifida, and with hearing and vision impairments are eligible. Research on these are limited, but one study last year found people with unmedicated ADHD had higher risks of getting COVID-19 while another found they were less likely to die from it.

The U.S. Centre for Disease Control says while having a disability doesn’t necessarily put someone at higher risk of COVID-19 complications, some people with developmental disabilities have underlying conditions, or may find it difficult getting information about COVID-19, understanding or following prevention methods, and communicating symptoms.

Jon Bateman, who has spina bifida, says it’s important the government seriously considers people, like him, with different kinds of disabilities in planning who gets the vaccine first.

“I do think that there’s certainly potential for people to fall through the cracks.”

This article is part of Groundwork, a pilot project in engagement journalism. Join the mailing list and add your voice at edmontonjournal.com/groundwork.