Griffin Shales is an extremely social and animated youngster, and when he’s at CHEO, he likes to go on walks in the hallways and introduce himself.

His “robot” is a motorized exoskeleton of sorts, built around a walker, and it’s what allows the five-year-old to go on these extended journeys in the first place. It’s the hope of his parents, Adam Shales and Michelle Vautour, that this recently developed robot — called Tréxō for the Toronto-based robotics firm that makes them — will help Griffin one day walk without its help.

After a pregnancy that had been without issues of any kind, Griffin was born at 26 weeks — more than a dozen weeks premature. He stayed in the neonatal intensive care unit for three months, at which point it was determined that he’d suffered hemorrhages in his brain and that there was a “chance” he might face later complications. One such complication not uncommon in such early births is cerebral palsy, but Griffin’s symptoms were not as glaring as are often seen in CP babies, and so doctors held off on an official diagnosis, instead adopting a wait-and-see attitude.

His parents nonetheless took what they felt was a proactive approach, arranging for physiotherapy sessions with Griffin, figuring that, at the very least, they couldn’t hurt.

“It was once a week,” says Michelle. “In hindsight, it should have been more.” 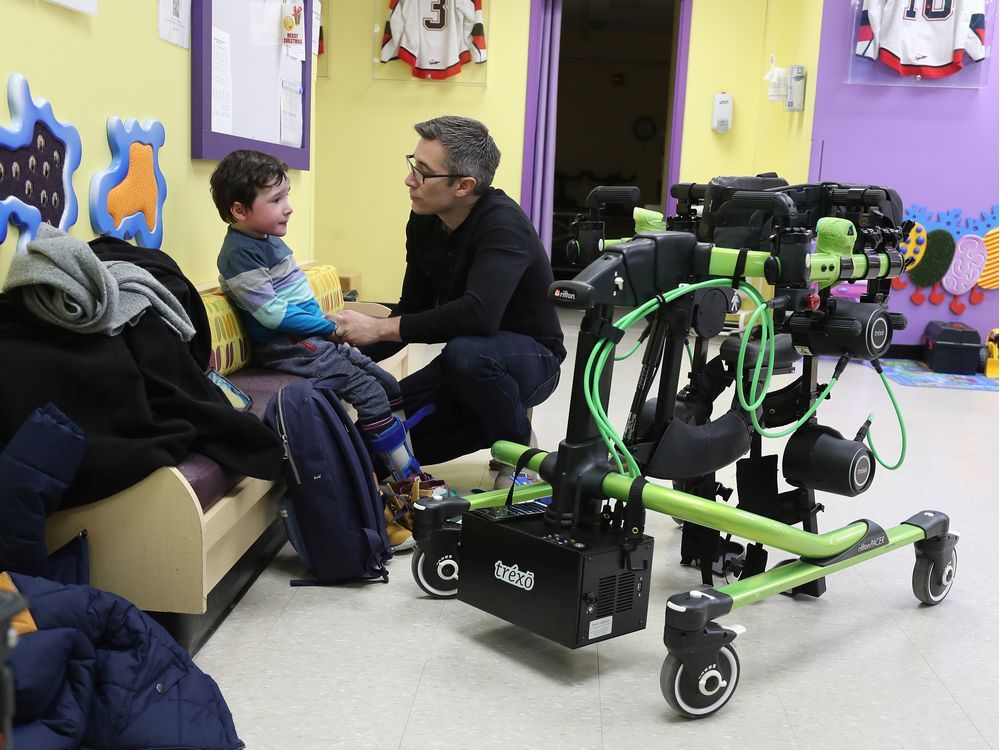 An early-intervention program at CHEO saw Griffin getting some treatment at nine months, but it wasn’t until he was a year-and-a-half old that the motor-skills milestones he was missing made it clear that he had cerebral palsy.

For a while, Griffin had two weekly hour-long therapy sessions at CHEO — one for physiotherapy, and one for occupational therapy. According to Michelle, demands on hospital resources saw the frequency of those visits, already inadequate, cut in half.

“And as he grows, he need more therapy, not less,” says Michelle. “But the system is grossly under-resourced.”

But even before that, when Griffin was about two, before he could even crawl or sit up, a neurologist essentially told Adam and Michelle that what they saw was what they were going to get, period. Things were not likely to improve at all.

“We walked out and said, ‘You know what? Who cares what he says?” says Michelle. “And in the year after that, Griffin probably made more gross-motor progress than he’d made in the two years previous.

“As a parent,” she adds, “one of the milestones you picture being excited about is your child walking. And early on in this journey, that’s all you can ask yourself: Will he be able to walk? And there’s nothing worse than asking doctor after doctor after doctor, and them not having an answer.”

That question, says Dr. Anna McCormick, is the one that breaks her heart to hear asked. “I want to tell people how we’re going to help you walk,” she says.

And so McCormick, a pediatrician involved in development and rehabilitation at CHEO, is excited about Tréxō, which she sees as being at the forefront of some groundbreaking innovation that could vastly improve lives.

“I want to bring technology into the hands of children who need it,” she says, “and even more than that, I want to speed up the development of technology for the children who really need it.”

Tréxō, she says, was designed to be a gait trainer, to teach people how to walk. The device, with motors at the hip and knee that are controlled by an iPad, can be initiated by the user, or it can do the bulk of the work. Things such as speed and step length can be programmed, while sensors track and measure results.

CHEO has one of the devices (and a request with the CHEO Foundation for another), and Griffin and his “robot” are part of a North American study — CHEO is the first Canadian centre to test and study it — to see what potential it might have. McCormick has presented her findings at organizations that include the European Academy of Childhood Disability, the American Academy of Cerebral Palsy and Developmental Medicine, and the American Congress of Rehabilitation Medicine.

The Tréxō helps to improve muscle tone and movement, and decreases pain, muscle contractures and surgeries required by contractures. It also allows children to better interact and socialize. And because it can be fitted for children as young as one, it can start teaching them how to walk while neural pathways are still being formed.

Right now, McCormick admits, the device has limitations. It’s bulky, for example, and needs someone to make it turn. And at about $30,000 each, they’re prohibitive to own — Adam and Michelle are leasing one for about $1,000 a month, which they describe it as like having a second mortgage. But McCormick imagines a not-too-distant future where, using advances in artificial intelligence, GPS, and by streamlining its design, Tréxō could become wearable technology.

“This is all fresh and new, and it offers the hope of change over time. It’s putting technology in the hands of the people who need it most.

“You and I have seen the way that technology has changed us, and we like it and it makes us more efficient. But we don’t need it the way these children need it. And we want to get it right and speed it up.”

And although they’ve only had their Tréxō since July, Griffin’s parents have been buoyed by the results, both physically and emotionally, in that short period.

“It’s like he and his robot are a team, and he likes to show people that he’s walking,” says Adam. “I think it gives him confidence.

“Even when we’re just doing it in our basement, he likes walking beside me and holding my hand, which he’d never done.”

“And that’s an experience,” says Michelle, “he wouldn’t have had otherwise.

“He’s more like a typical five-year-old kid. As a family, it gives us hope. It’s early still, but we’re hoping that all this practise we’re doing in the robot will eventually translate to gains outside of the robot. The Tréxō gives us hope that with a lot of practice, maybe walking will be one of those things that he’ll learn to do.”