It was during the early days of the pandemic when Jennifer Buchanan began to suspect she needed a dose of her own medicine.

The Calgary-based music therapist often had her clients create their own playlists, an exercise meant to improve their mental health. But, for years, her own music was being put aside as she worked with others. Given that she was a music enthusiast long before she was a music therapist, she began to think it was time to become a student of her own teachings.

“It’s probably very similar to how the carpenter’s house needs to have work done on the cabinets,” says Buchanan. “That’s how it was for me. What happened was that I realized the homework I was giving clients in-between sessions seemed to always be around a certain playlist for a certain mood or a certain activity. As we entered COVID, after I had been doing this for others for so long, I realized I needed to do this for myself. I own my own business, I was feeling stressed out. There were losses and I wasn’t seeing my staff anymore who would give me a lot of energy. Here I am transforming my son’s basement into a little cubbyhole. I realized I needed something to fill my life with, in my case, optimism. So that was my first list: What music is going to give me some optimism in my new environment?”

On the surface, the songs she chose were not optimistic, perhaps shining a light on one of the great mysteries of music listening: Why do sad songs make us feel better?

“It might have been Adele from one of her earlier albums,” she says. “It was Nina Simone and Tracy Chapman. The groove, for me, validated where I was at and made me feel better. And that’s all I needed to kickstart the optimism.”

It all reinforced what Buchanan calls the “power of the playlist,” something she had been preaching to clients for years. It’s at the heart of her new book, Wellness, Wellplayed: The Power of a Playlist, which takes readers through the process of curating “purposeful playlists” to bring out certain emotions or to act as musical backdrops for performing various tasks or conjuring various memories. It’s something she touched on with her 2020 book, Tune In. But the response to that section of that book was so strong that Buchanan decided to completely dedicate her next one to the topic. Plus, it seemed a timely subject for a book. With COVID-19 lockdowns forcing people into isolation, it became clear that music was becoming a lifeline for many. 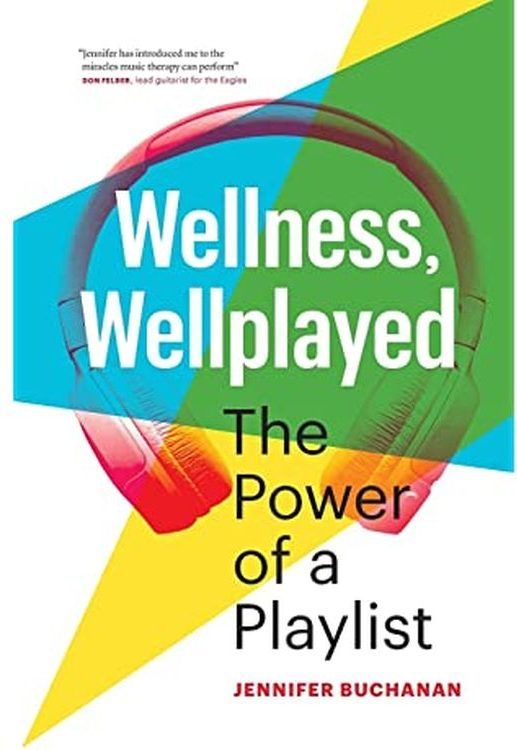 “On social media, we were seeing people singing from their balconies to one another even though we couldn’t see each other anymore,” she says. “Choirs found a way to adapt and sing on social media in the little boxes so we could see them. Although we couldn’t go out and access live music that we all missed terribly, the fact that we were in a period of time where we can still access music in some regard, it has become a way for people to stay in touch not just for others but also to themselves. I think what I’ve heard the most as a music therapist was ‘music gives me comfort.’ And that’s what people were needing in those early stages and maybe even now as we’re transitioning back.”

Of course, depending on your vintage, it’s altogether possible that you already have a history creating purposeful playlists. In the early chapters of her book, Buchanan chronicles the humble history of the old-fashioned mixed tape. As a Gen-Xer, she has fond memories of curating her own tape by patiently recording songs from the radio. But this time-consuming practice has become a bit of a lost art, with streaming services such as Spotify supplying playlists based on various themes and genres.

But there is just as much value in the creation of the list as listening to it, Buchanan argues.

“When we curate our music we put it in order, we listen through the songs that we are selecting, we then begin to remember,” she says. “We are accessing those areas in our brain that take us right into our limbic system of feeling. We go into our memory channels and we begin to imagine, we begin to remember. It is in those moments – especially going through something like we just went through like COVID – where our amygdala is on fire, which is the part of the brain we talk about all the time, where you want to run away or you feel like you’re a bit paralyzed in decision-making. When we begin to do these playlists, these acts of creativity, we can then release that area of our brain and begin to make better decisions. We can make a good decision afterwards because we’ve had that opportunity to explore a different area of our brain than the one that is really stressed out.”

In her book, Buchanan looks at the science of listening and how it impacts or works with various areas of the brain. She also takes readers through the process of curating playlists that activate memories, regulate moods and boost motivation. There are exercises assigned, including one that involves creating a “life’s soundtrack” by constructing a chart that has listeners listing their earliest music memories right through grade-school musical memories, those in teendom and into adulthood.

Buchanan has been a music therapist for the past 30 years, implementing hundreds of therapy programs throughout Canada. She has used music therapy to help clients who have suffered a stroke or brain injury improve their movements or speech, or are suffering from depression and other mental health issues or who are going through palliative care.

Buchanan suspects she first discovered the power of music while a first-grader at Belmont Elementary in Langley, B.C., in the 1970s, even if she wasn’t fully aware of what she was experiencing. During a school assembly, singer-songwriter John Denver appeared to sing and show a film of him travelling the West Coast. At the time, Denver would have been at the height of his popularity, but as a seven-year-old Buchanan didn’t know who he was. But she will always remember him singing Country Roads, Take Me Home, which never fails to trigger memories and emotions.

“I loved elementary school, I loved my teachers,” she says. “This would have been before I played any instruments but we were starting to sing in choirs. Having him come out and share video with a guitar and songs and saying he wrote something and hearing the stories and him talking about the people he knew. You left just knowing you were a part of something. He had that way, even at a young age, of making me feel like I was a part of something and that the world was good. That was a day when I felt a lot of optimism and hope. I wouldn’t have been able to define it like that as a kid. But looking back, that’s how I feel. That’s the narrative I’ve spun around the whole thing.”

Wellness, Wellplayed: The Power of a Playlist is now available.