Loved ones are hugging again inside Ontario’s long-term care homes, Quebec has blessed mask-free, outdoor proms for July and, outside of Manitoba, COVID-19 is dwindling, Canada’s COVID odyssey is drawing closer to its end. The wild card hovering on the horizon, however, is Delta, the variant behind runaway infections in India and that is now “essentially across Canada,” according to the country’s chief public health officer.

In fact, Delta is not yet widespread, but will be as soon as borders open and travel resumes, said University of Ottawa virologist Dr. Marc-André Langlois, lead of Canada’s Coronavirus Variants Rapid Response Network.

“Right now, most Delta cases are caught at border entry points and there has been relatively few cases within the country,” he said.

In the United Kingdom, Delta has surpassed Alpha, formerly known as the U.K. variant first identified in England, and risks upending the nation’s full reopening, slotted for June 21. It’s almost certain that Delta will overtake Alpha in Canada, “once lockdown and sanitary measures are eased,” Langlois said.

It’s also well within the realm of possibility that Canada could see another pandemic wave, possibly by the end of summer, Langlois said, one that “will affect severely those not vaccinated, and mildly those vaccinated once.”

Double-vaccination offers upwards of nearly 90 per cent protection against Delta, but a single shot, less so. “This is why there is a race against the clock for national double-vaccine coverage,” Langlois said.

It’s also why some believe provinces should be aiming for 90 per cent vaccine coverage for a safe reopening, not the 75 per cent threshold initially set by federal health leaders. “I think having 90 per cent of our population with two doses would put us in a really strong position,” said Simon Fraser University epidemiologist and COVID modeller Caroline Colijn.

If Delta is several-fold more transmissible than “regular” COVID, the original variants from Wuhan, and it seems pretty clear that it is, then “we’re going to need 80 plus per cent of our population immune, which means more than that immunized,” Colijn said. The authorized vaccines are “awesome and wonderful and great and innovative,” she said, but they’re not perfect.

While there are still many uncertainties, “our best guess would be that if we just went for it, and reopened with only 75 per cent of eligible people vaccinated, that’s not enough. We would see so many infections in the rest,” she said, meaning the unvaccinated, and the vaccinated for whom the vaccine didn’t quite take. Children under 12 aren’t yet eligible for vaccination, and some people can’t be vaccinated for medical reasons. Potentially a third of the population would still be vulnerable. If every one person infected with Delta could spread the infection to four or five others, “that’s when we would start talking about waves, and fourth waves,” Colijn said.

Although people speak about waves, “really, the waves have just been, we’ve turned on and off our control measures, and then the cases have risen and fallen, and we’ve gone, ‘Oh, look, a wave.’ But it’s not. It’s been completely predictable,” said Colijn, who holds a Canada 150 Research Chair in mathematics for evolution, infection and public health.

“Now it’s getting a little less predicable because we don’t really know in a Canadian reopened population how transmissible these variants are. But we think it’s going to be not great.”

According to Langlois, as of Tuesday, federal data showed 1,350 cases of Delta in Canada, and 204,140 cases of Alpha. (The World Health Organization last week renamed variants after letters of the Greek alphabet, to avoid stigmatizing countries.)

Early evidence suggests that, three weeks after the first dose of either Pfizer-BioNTech or AstraZeneca, both provide 33 per cent protection against symptomatic infections with the Delta variant. The second dose of Pfizer, however, boosts that to 88 per cent, while a double dose of AstraZeneca provides 60 per cent protection.

Higher infectivity means Delta could “rip through unvaccinated populations if life returns to normal in a fortnight,” Peter Openshaw, a professor of experimental medicine at Imperial College London told the Financial Times.

It also may cause more severe disease. Early evidence from England and Scotland suggests there may be an increased risk of hospitalization compared to Alpha cases, with some areas showing hospital admissions increasing, though the national trend still isn’t clear, reports Public Health England.

Dr. Peter Jüni believes Delta will eventually supplant Alpha in Ontario, but that summer, combined with efforts to push first and second vaccine doses out faster, particularly in hot spots, means “we’ll most likely get this under control.”

On Monday, Ontario health officials said vaccinations so far appear to have tempered the spread of Delta, which has been circulating fairly widely since mid-May in parts of Toronto and the Peel Region, and is now “pretty much in every health unit” in the province.

But come fall, once people start to move inside again, “if we have unvaccinated, or partially vaccinated pockets, if there are dense networks out there of people who are vaccine hesitant, the risk that they will eventually get infected between October and April 2022 is very high,” said Jüni, scientific director of Ontario’s COVID-19 science advisory table. 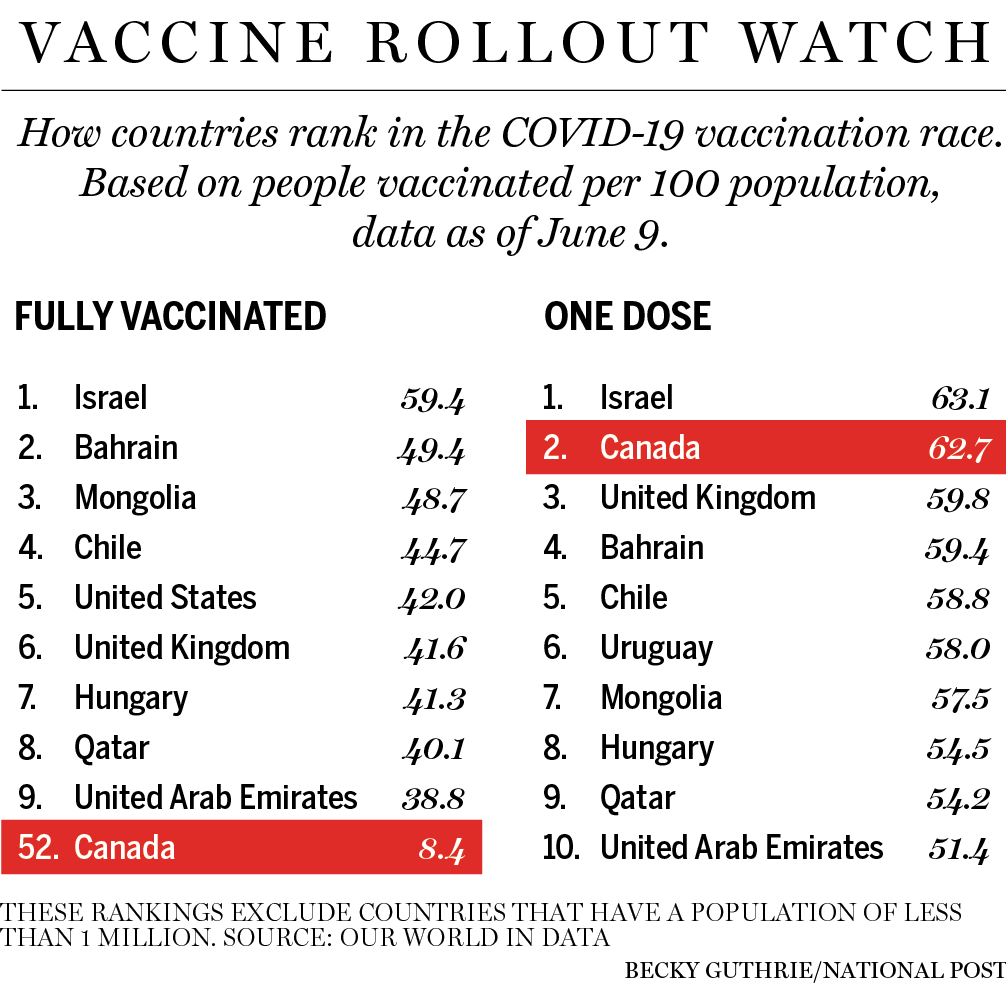 The more a virus moves from person to person, the more opportunity it has to mutate and acquire different behaviours, said Jason Kindrachuk, Canada Research Chair in emerging viruses at the University of Manitoba. “It’s a constant battle against this virus,” he said.

“We won’t see that high exponential growth right off the bat — it’s probably going to take some time to build up some momentum in the population and kind of start moving through those people that don’t have immunity or protection against it,” Kindrachuk said.

“I think we’re all hoping (Delta) will be less severe, but we still need to try and reduce transmission,” he said. “We need to be thinking about second doses, you’re starting to see provinces picking that up. It’s a bit of a race. And I think we’re going to see how well we do very quickly.”

No province has set 90 per cent as the target threshold for vaccination. Colijn, of Simon Fraser, doesn’t think 75 per cent is hugely off the mark. “I think it’s probably a great starting point for starting to reopen,” she said. “But I don’t think it’s going to get us there in terms of a completely fully back to normal life.

“I can’t say to you, ‘Yep, 90 per cent, then we’ll be able to just party like there’s no tomorrow,’ because there is tonnes of uncertainty there. But it is likely to give us resilience to transmission to the extent that we could hopefully establish a mostly normal life,” Colijn said.

Polls suggest 85 per cent of Canadians are willing to be vaccinated. “Ninety per cent isn’t that far off, and every five per cent makes a huge difference.”