For Kanata’s Sharon Charlebois, it all began two days after Christmas with a bout of tiredness.

“I thought it was all the shopping and baking and wrapping gifts,” said Charlebois, 73. “I was just not feeling well, but I never thought too much of it.”

To be on the cautious side, however, the retired civil servant and school administrator booked a COVID-19 test for herself and her husband, Leonard. Both tested positive on Dec. 28.

So began a COVID-19 odyssey for Charlebois that would land her one week later in the intensive care unit of The Ottawa Hospital. There, she would enrol in a clinical trial that’s testing the ability of multipurpose stem cells, known mesenchymal stromal cells (MSCs), to modulate the immune system’s response to COVID-19.

Moderating the immune system’s runaway response to COVID-19 is key to treating severe cases of the disease. 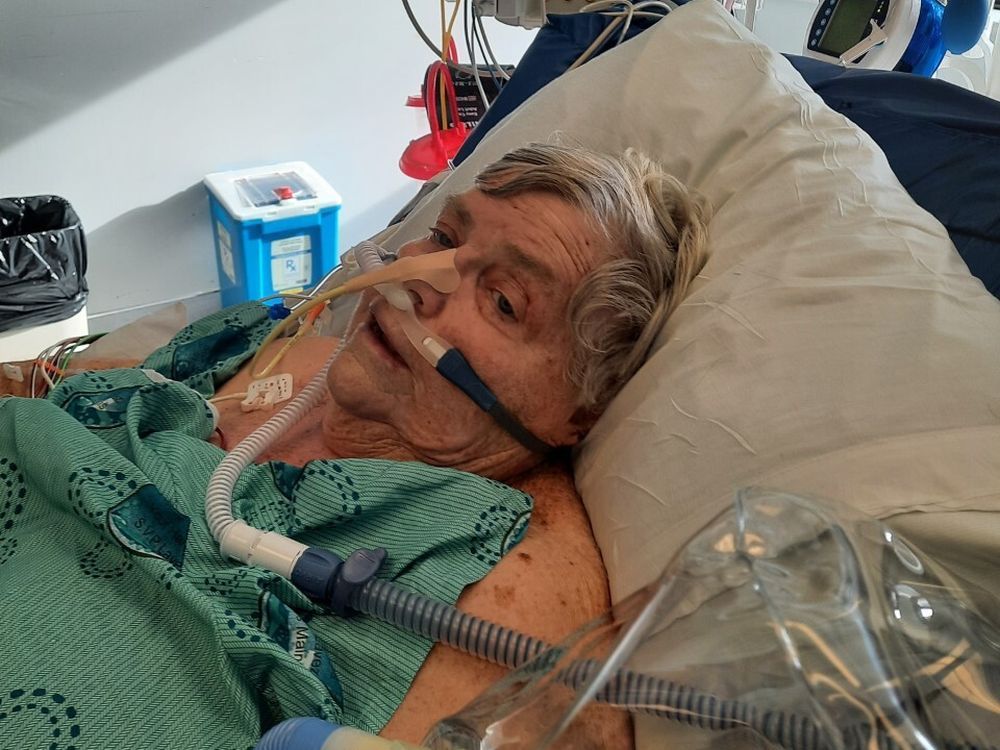 In severe COVID-19, patients develop a condition known as acute respiratory distress syndrome (ARDS) in which the lung’s air sacs fill with fluid and inhibit the transfer of oxygen to the bloodstream. ARDS can be triggered by other ailments, including sepsis, and is the leading cause of ICU admissions and deaths.

“With COVID, it was clear the major problem bringing folks to the ICU — and why they were dying — was the effect on the lungs,” said Dr. Duncan Stewart, executive vice-president of research at The Ottawa Hospital, and one of three Ottawa scientists who launched the phase one clinical trial.

That trial was recently approved for a second phase — a randomized trial — that’s expected to launch next week in Ottawa and at sites in Toronto and Montreal.

Stewart said MSCs are important to investigate as a COVID-19 treatment because of their multi-faceted ability to influence the immune system. The cells can tamp down the system’s hyperactivity while also enhancing its beneficial effects. “MSCs have a very balanced effect, which is in concert with what we believe is their biological role in the body: to facilitate healing, support repair and reduce inflammation,” he said.

The cells are lab grown from MSCs drawn from umbilical cord blood. MSCs can also be harvested from bone marrow, but umbilical cords contain younger cells that divide more readily in a lab.

Sharon Charlebois was moved to the ICU on Jan. 4 after collapsing on the floor of her hospital room. Doctors told her family the course of her disease was unpredictable.

The next day, Charlebois was asked if she wanted to be involved in a COVID-19 clinical trial. ICU nurse Rebecca Porteous and research program manager Irene Watpool ensure that every COVID-19 patient in the hospital has the opportunity to participate in research.

Charlebois volunteered for the MSC clinical trial, she said, because “I thought it could help somebody else — and I had nothing to lose.”

She received her first stem cell infusion the same day, the first of three. She had a feeding tube inserted the following day and was placed in a helmet-style ventilator that delivered oxygen. She was too sick to be scared: “I didn’t have the strength to worry about anything,” Charlebois said. “I figured I was in good hands.”

Slowly, during the succeeding days, her blood oxygen level and other indicators improved. The oxygen helmet was removed on Jan. 9 and the next day, she ate dinner for the first time since arriving in hospital. She was moved from intensive care to the COVID ward on Jan. 13 and sat in a chair for the first time two days later.

Charlebois took her first steps with a walker Jan. 18 and had her first shower three days later. “It was heaven,” she said. 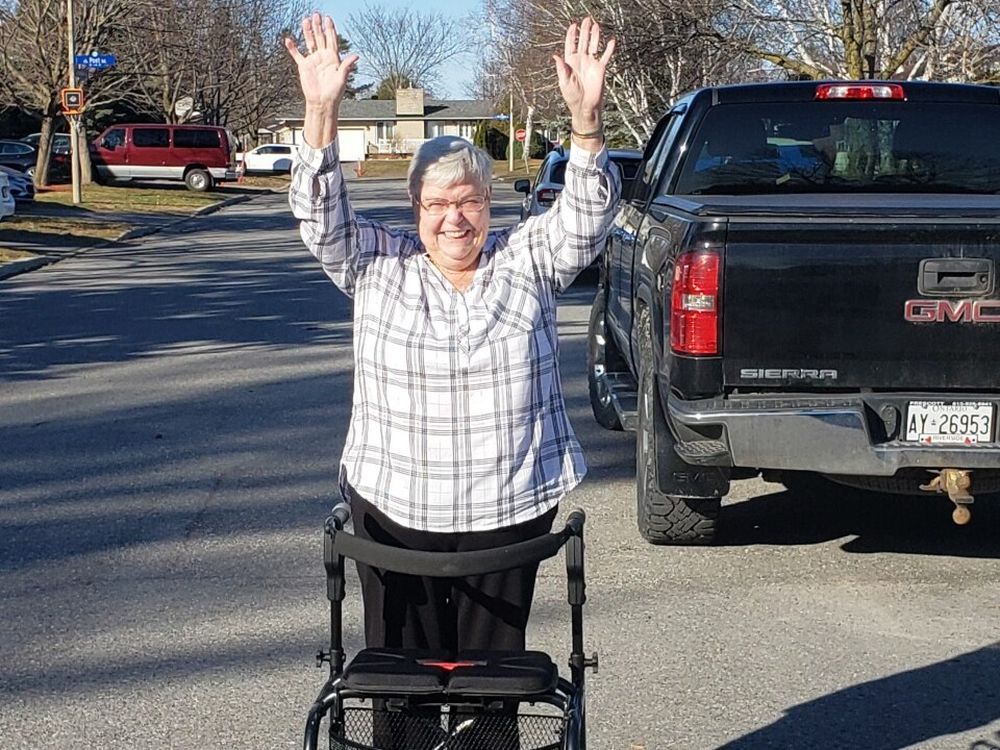 Her condition improved enough that Charlebois was discharged Jan. 25. Her husband, fully recovered from COVID, and her daughter picked her up at the front door.

For the past two-and-a-half months, Charlebois has received physiotherapy, occupational therapy, nursing visits and help from a personal support worker. This week, she started to rehab entirely on her own. She’s able to go half a block with her walker before being forced to rest. Breathing and stamina remain her biggest challenges.

“The doctor has told me I’ll probably have the walker for two or three months, and they don’t know if my lungs will ever come back the way they were,” she said.

She’s immensely grateful to the nurses and doctors who cared for her at the Civic campus, and helped her through the medical crisis. “It was a hard road, but at least I’m still here,” she said. 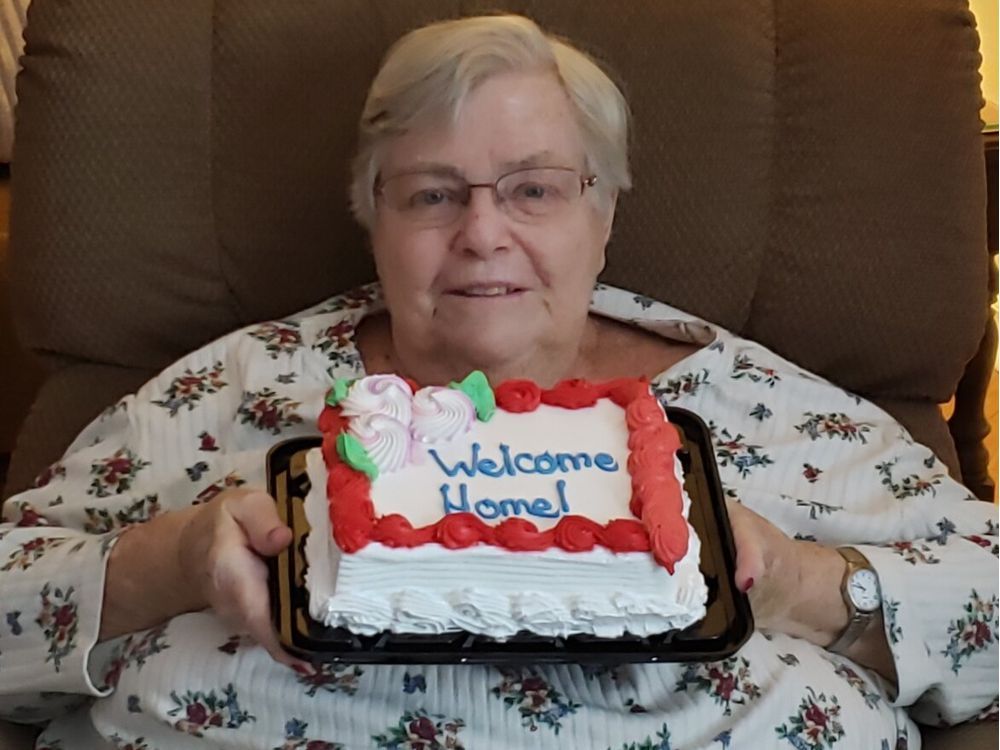 Dr. Stewart said more data analysis needs to be done to understand the role that MSCs played in Charlebois’ recovery. Early signs from the phase one trial, he added, suggest the treatment holds promise.