They meet between noon and two for the task of deciding which case must go to the operating room, which person is close enough to permanent or irreparable harm, and who must wait — “declined.”

“We’ve been very strict with our surgeons to say only bring the most urgent work forward,” said Dr. Najma Ahmed, a surgeon at St. Michael’s Hospital in Toronto. Life, limb or vision threatening only.

The triage meetings have been held since a directive was issued to Ontario hospitals to cease “elective,” non-urgent surgeries so that staff may be redeployed to the COVID wards and the ICU. A knee replacement so someone can walk, a hernia repair to restore core strength and the abdominal wall, surgery for painful, bleeding fibroids that make women anaemic. For now in Ontario, the answer is: We cannot assist you.

This isn’t India, where a catastrophic COVID-19 wave has brought the country to its knees, where doctors tweet SOS messages pleading for oxygen, and where shrewd variants now spreading in Canada have made India’s first wave look 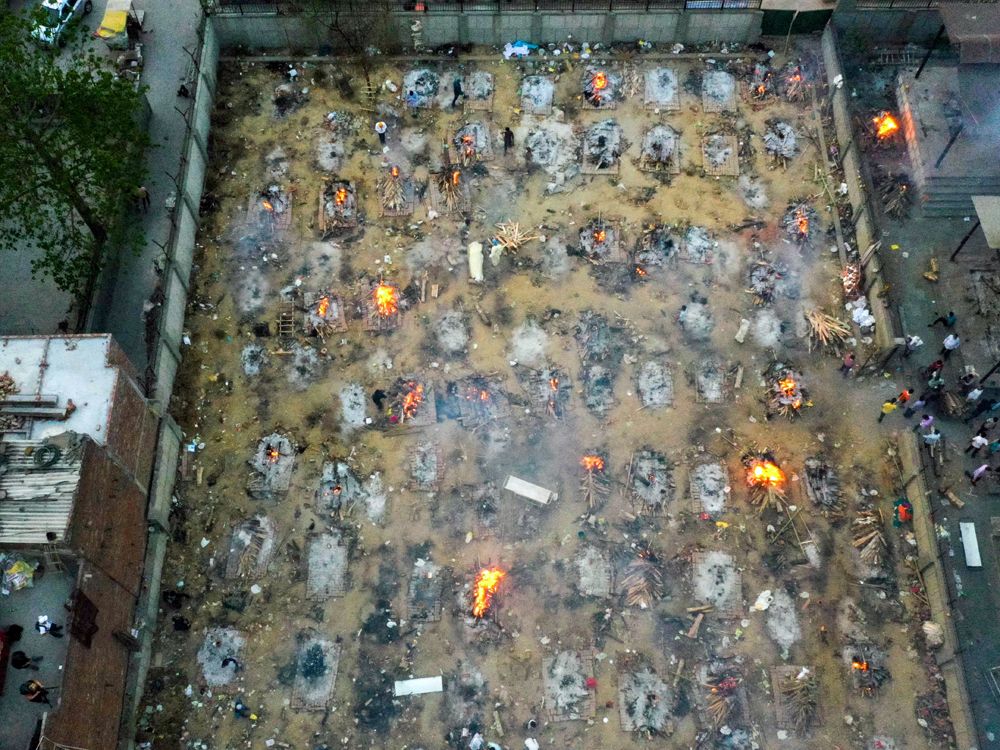 But India, which on Friday posted the world’s largest single daily COVID-19 caseload for a second day, with 332,730 cases and 2,263 deaths, is a cautionary tale.

“We say, ‘Oh, that’s India.’ But we all belong to the same human species,” Ahmed said. “We all share the same DNA and we’re all subject to this virus. It doesn’t really care whether it’s in India or whether it’s in Toronto.”

There will be harm from the postponed operations, Ahmed said. And while vaccinations seem to be increasing, while the public health measures seem to be having an effect, “if we don’t get this under control and I mean like, today, tomorrow, one false move here and there and we’re going to be back on the accelerating trajectory.”

Declare success too soon and Canada could face its own crisis. “If we open up everything, give up on public health and not vaccinate rapidly, the new variants can be devastating,” said Dr. Madhukar Pai, Canada Research Chair in epidemiology and global health at McGill University, this week.

The situation in India also has scientists puzzled and wondering how much of this is new infection and how much reinfection. Like Manaus in Brazil, studies suggested that up to half the population in some of India’s biggest cities had already been infected in the first wave, meaning fairly high immunity in the population. “I think the problem is that what we are seeing is that this idea of herd immunity is messy,” said University of Manitoba virologist Jason Kindrachuk.

A month-long ban on direct passenger flights from India and Pakistan is now in effect in Canada, but too late to prevent the arrival of a new “double mutant” variant. Known as B.1.617, the variant has been identified in British Columbia, Quebec and Alberta. 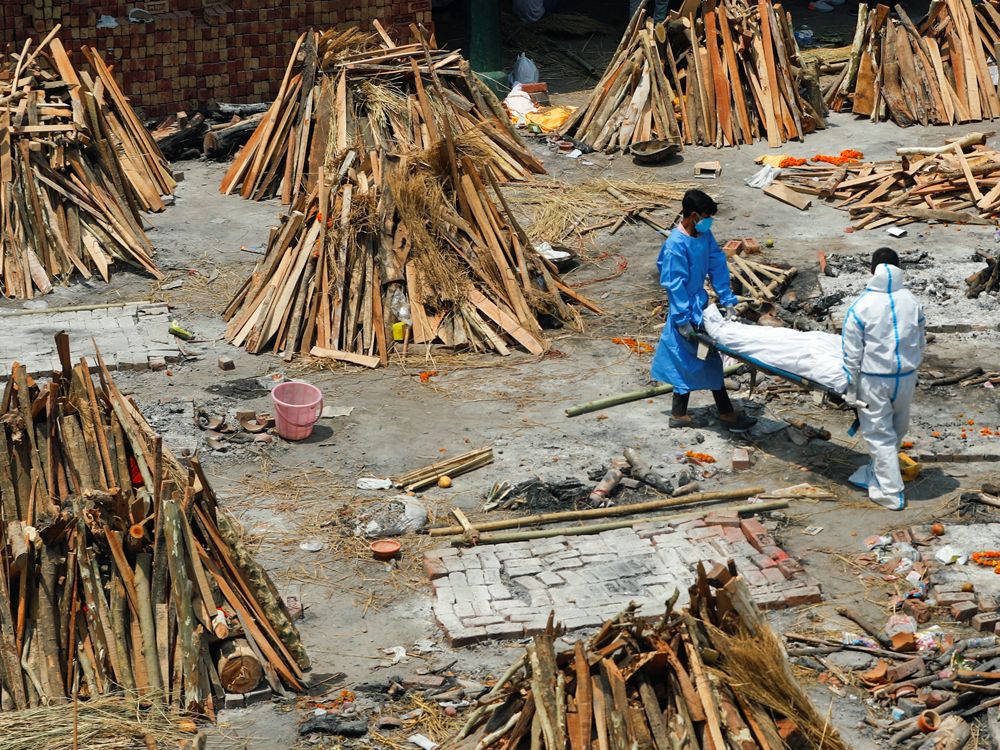 All told, “variants of concern” now account for more than half of confirmed COVID-19 infections in Canada, according to new modelling released Friday, an update that contained some glimmers of light amid the darkness.

Case counts are slowly levelling off in most provinces outside Alberta and Manitoba. Nationally, the RO, the basic reproductive number, meaning the number of people each infected person goes on to infect, has dipped below one, where it needs to be for the epidemic to begin petering out. Restrictions in Quebec, Ontario and B.C. appear to be slowly paying off.  Summer could see a possible “safe lifting scenario,” should three-quarters of adult Canadians receive at least one dose of a vaccine by July, including 20 per cent fully vaccinated.

The not so hopeful? Toronto is on fire. Across Ontario, 869 critically sick people with COVID were in intensive care last Monday. Eighty people were transferred by Ornge air ambulance across the province Thursday to free up ICU capacity in the Greater Toronto Area, the highest number of transfers in a single day all year. Pregnant women with COVID are undergoing emergency C-sections, a range of two people per day have died from the virus at home over the past two weeks in Ontario and hundreds have endured hours-long line-ups at pop-up clinics in hot spots for a Hunger Games-like chance at a vaccine.

Now, word of a “triple mutant” virus detected in India is circulating. But all variants carry an alphanumeric soup of mutations, some more worrisome than others. B.1.617 has several mutations shared by other variants that have shown to have some antigenic escape, meaning the ability of a virus to evade the immune system of its host — in this case, human beings. But how the mutations behave together, or on the background of other mutations, is still being teased apart. “It’s not easy to put the breadcrumbs together to figure out what this all means,” Kindrachuk said.

The term “Indian variant” should be avoided altogether, Dr. Sharon Peacock, professor of public health and microbiology at the University of Cambridge, said in a press statement. No one can say conclusively where it first arose. It’s not clear whether it’s driving India’s current brutal wave and there are fears South Asians in Canada “will be hit with an escalated level of racism as we cope with our own third wave and help families battling the second wave back home,” Ananya Tina Banerjee, an assistant professor in the School of Global and Population Health at McGill, said on Twitter.

“The real question for us is figuring out, as quickly as possible, with India, what does this variant mean? Is there a correlation between B.1.617 and the crisis that they’re in right now,” Kindrachuck said. Does it have enhanced properties? “For Canadians, that’s the information we need to know.” India has sequenced less than one per cent of total COVID-positive samples, so the data are scarce.

“What does it tell us from our own personal standpoint? It tells us we are still dealing with the same virus,” Kindrachuck said. We need to supercharge vaccinations by all means necessary, but also bear down, including masking, distancing and all the infection prevention control measures we’re so weary hearing about. “We’ve got to be vigilant with that stuff if we don’t want to see this new variant, or any other variant, transmitting widely through our community,” Kindrachuck said, “because once it hits a tipping point, we can’t stop it in its tracks.”

India shows the risk of underestimating the virus. After a large wave, the numbers started nose-diving early in the New Year, “and everybody started celebrating, declaring success, that ‘we’re out of the woods,’” said Pai, of McGill. “And we thought a good proportion of Indians would have gotten naturally infected last year and would have antibodies, and then vaccination started,” first to health-care workers early in the new year, then out to the broader population in March.

“And then the Indian government, in its wisdom, opened up in a hurry,” Pai said. Millions attended religious festivals and super-spreader political rallies. “No social distancing, masking went down, public health measures were relaxed and testing went down,” Pai said. “And then we started to see the number climb again. You’ve seen the graph, right? It looks like a rocket going up. I’ve never seen anything like it.”

In India, deaths are under-reported. Infections are likely closer to three million per day, there is no place to cremate people and vaccinations aren’t happening quickly enough. Pai is worried about family in India who have become infected with COVID. “They can’t even get to hospital. There is no bed for them. We’re monitoring them at home with oxygen pulse oximeters,” tiny devices that clip onto a finger and measure oxygen saturation levels. “We’re managing them as best we can, but if they really develop serious breathlessness, we just don’t even know what to do for them.”

In India, entire families are falling sick and the young are getting infected. In Ontario, similar reports are emerging, of entire families coming to hospital with COVID, of people down to their 30s or 20s in intensive care. Pai worries that, in India, natural acquired immunity may not be adequate protection from the new variants.

“But we really need to see this as a global problem,” he said. “If you have fires raging in India, or Brazil, or somewhere else next month, we will never get out of these pandemic cycles.”