With vaccinations surging across Canada, and confirmed COVID case counts and hospitalizations at a national level declining, the other side of the pandemic is drawing tantalizingly, mercifully closer and experts are beginning to offer glimpses of the future.

There are still many unknowns, and only speculations as to “what next,” but the story that began with a pneumonia of unknown cause in Wuhan, China 17 months ago won’t end abruptly, epidemiologists say.

“We will not eradicate COVID-19, at least not probably for the next decade,” Dr. Peter Jüni, scientific director of Ontario’s COVID-19 science advisory table told a recent Ontario Medical Association briefing. Instead, the virus will shift to being a seasonal disease, something more like a “tedious influenza,” Jüni said.

Ashleigh Tuite agrees SARS-CoV-2 will be with us for a while, “possibly forever.” But vaccines and population immunity will end the pandemic, Tuite, an epidemiologist at Toronto University’s Dalla Lana School of Public Health, said in an email. The more people vaccinated, the more immunity, the less transmission and disease.

Two doses of Pfizer or Moderna provide over 95 per cent efficacy.

“That puts the measles vaccine almost to shame. That’s how effective these vaccines are with two doses,” said Dr. Gerald Evans, head of the division of infectious diseases at Queen’s University in Kingston.

All the coronaviruses that cause the common cold, like the alphanumeric 229E or OC43, at one point emerged into the human population from an animal reservoir “and probably produced something like we’re seeing with COVID-19,” Evans said. The human race ultimately adapted, the virus itself became attenuated “and now we just accept it as one of the common cold viruses that sort of pop up,” he said.

His view is that a similar story is playing out again. “Except now, in the 21st century, we can accelerate that whole evolutionary process, because we’re going to have vaccines to protect everybody while this virus emerges itself out into the human population as a human coronavirus.”

Still, the situation in India is a continuing catastrophe, other parts of the globe remain fraught, the variants are keeping many people nervous, questions remain over mixing vaccine doses (though preliminary results from a Spanish study suggest AstraZeneca followed by Pfizer is safe and may elicit a strong immune response) and it’s not yet clear just how long vaccine-induced immunity lasts.

With a new endemic virus, ongoing vaccinations will likely be required “as far out as the eye can see,” said Amir Attaran, a law professor at the University of Ottawa who holds a doctorate in immunology. “Certainly for the amount of time it takes to vaccinate other countries in the world, because they will continue generating variants that eventually make their way to us.”

“We’ve demonstrated in Canada that we don’t really wish to be Australia and wall ourselves off in quite the same way, so variants will get here,” Attaran said. “And if you take the assumption that, even with a full court press you’re not going to vaccinate over half the world until 2024, then, yeah, we’re in this for a few years.”

The SARS-CoV-2 virus could evolve into something gentler or more ferocious. Both are equally possible, Attaran said. But the odds of a variant emerging that simply evades vaccination no matter what’s thrown at it are “very, very low,” he said. “You’ll just have to tweak the vaccine again and again and again. But that’s flu. That’s what we do for flu. And this virus is less of a trickster than flu. So we can get there.” 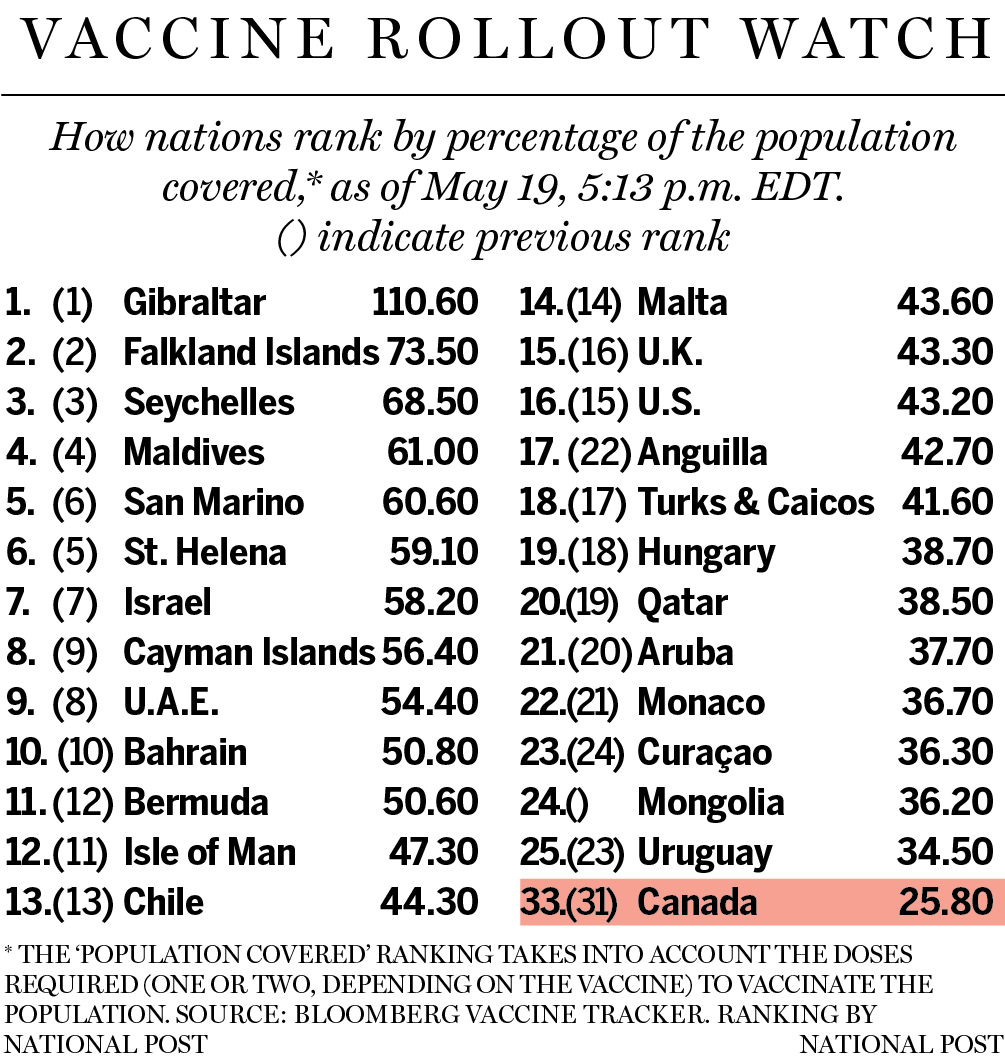 The way out, said Jüni, will be through population-level immunity. Vaccine skepticism could put that immunity at risk. Clusters and flare-ups could occur in communities with low vaccine uptake. And even the best vaccines aren’t perfect. We’re still going to have disease. The acid test, Jüni said, will come in October when people move inside again.

“I don’t know that we’ll avoid a fourth wave completely, since we don’t have vaccines approved in the under-12-year-olds yet, and the virus will still be circulating globally,” Tuite said. But any resurgence is going to look very different, “because, thanks to vaccination, we’ll have high levels of protection in the people most likely to experience severe outcomes after infection.”

It’s possible the virus could mutate into something milder, said Dr. Kumanan Wilson, a specialist in general internal medicine at The Ottawa Hospital. “That really didn’t seem to happen, but it’s still possible.” With better therapies, COVID could become a treatable condition that won’t threaten to overwhelm hospitals. Vaccines will have to be distributed globally. Partially vaccinated populations could pressure the virus to keep mutating.

It’s still not always clear why cases surge and why they don’t. “Why did India go for all those months with minimal activity until all of a sudden it literally blew,” renowned epidemiologist Dr. Michael Osterholm said on a recent podcast for the University of Minnesota’s Center for Infectious Disease and Research Policy.

“We have to understand that there is the unexpected,” Osterholm, the center’s director, said.  Public discussions are needed to decide what’s acceptable and what’s not. Is any case of COVID unacceptable? Is the goal to have no symptomatic cases? “Do you want to go to a public venue and sit next to someone and wonder, oh my god, are they infected or not? Or do you want to go to a venue that has required everyone to show proof of vaccination?” Osterholm said.

“It’s a question of figuring out what we’re willing to live with and how we do the best job of preventing what there is,” she said.

“But the Brits are doing pretty well. And as long as they are looking good, then we know we’re gonna be okay, right?”

Even after the worst is behind us, many will continue masking, especially through the winter season. “But we won’t have to necessarily mandate a lot of stuff,” Evans said. Attention will be paid to keeping public spaces clean and improving ventilation, looking for COVID, testing for it, isolating and quarantining those at risk, he said.

“Ultimately, when that vaccination rate creeps up over the next year or so to even the people who initially said ‘I don’t want the vaccine,’ I think it’s going to kind of disappear, and you and I can say, remember back in 2021 when we were talking about COVID-19?”