More than a year into the pandemic, it’s a refrain that still reverberates on social media: COVID-19 is no worse than the seasonal flu, so why all the fuss?

Such thinking can lead to condemnation of lockdowns and their harsh side effects and sometimes conspiracy theories about drug companies and rich philanthropists and vaccines.

But a metric that’s drawn relatively little public attention belies the narrative that the coronavirus threat has been grossly exaggerated. Statistics indicate that Canada and most other countries have seen significant rates of “excess deaths” during the pandemic — many more people dying than the average for previous years.

And the worldwide excess-death data reveal some intriguing trends, patterns that might indicate how best to tackle the next pandemic.

Nations like Australia, Taiwan and South Korea that are rated highly for containing the coronavirus have seen no excess deaths, or have reported even less mortality than in “normal” years, further underscoring the success of their public health tactics.

Israeli economist Ariel Karlinsky, a researcher at the conservative Kohelet Economic Forum, admits that he decided to build his “world mortality dataset” partly to explore suspicions that strict public health measures were unnecessary and counter-productive. The project’s excess death data on 77 countries is drawn from a variety of sources and updated regularly.

But it hasn’t confirmed Karlinsky’s hypothesis.

“I did think the lockdowns were a cure worse than the disease,” he said in an interview from Jerusalem. “I was very much on the side of ‘we have to open up, we’re doing more harm than good.’ I changed my mind on that.”

As an indicator of how the pandemic has affected the world, excess deaths are seen by many experts as a gold standard of sorts. That’s because of the flaws of the alternative statistics.

The number of laboratory-confirmed COVID cases, for instance, depends on the efficiency and extensiveness of testing; coronavirus mortality can also be hard to compare given countries’ different criteria for counting someone as a COVID death; and some places have probably tried to hide their pandemic toll.

Excess mortality may not specify the cause of death, but is more comprehensive and comparable between nations, said Jason Oke, a senior statistician with Oxford University’s Nuffield Department of Primary Health Care Sciences.

According to a Statistics Canada report last month, this country saw 13,798 more deaths than would be expected by mid-December of 2020, based on previous years and after accounting for the aging population. That’s an increase of about five per cent, the agency said. There had been just over 14,000 deaths attributed to COVID-19 by last December. 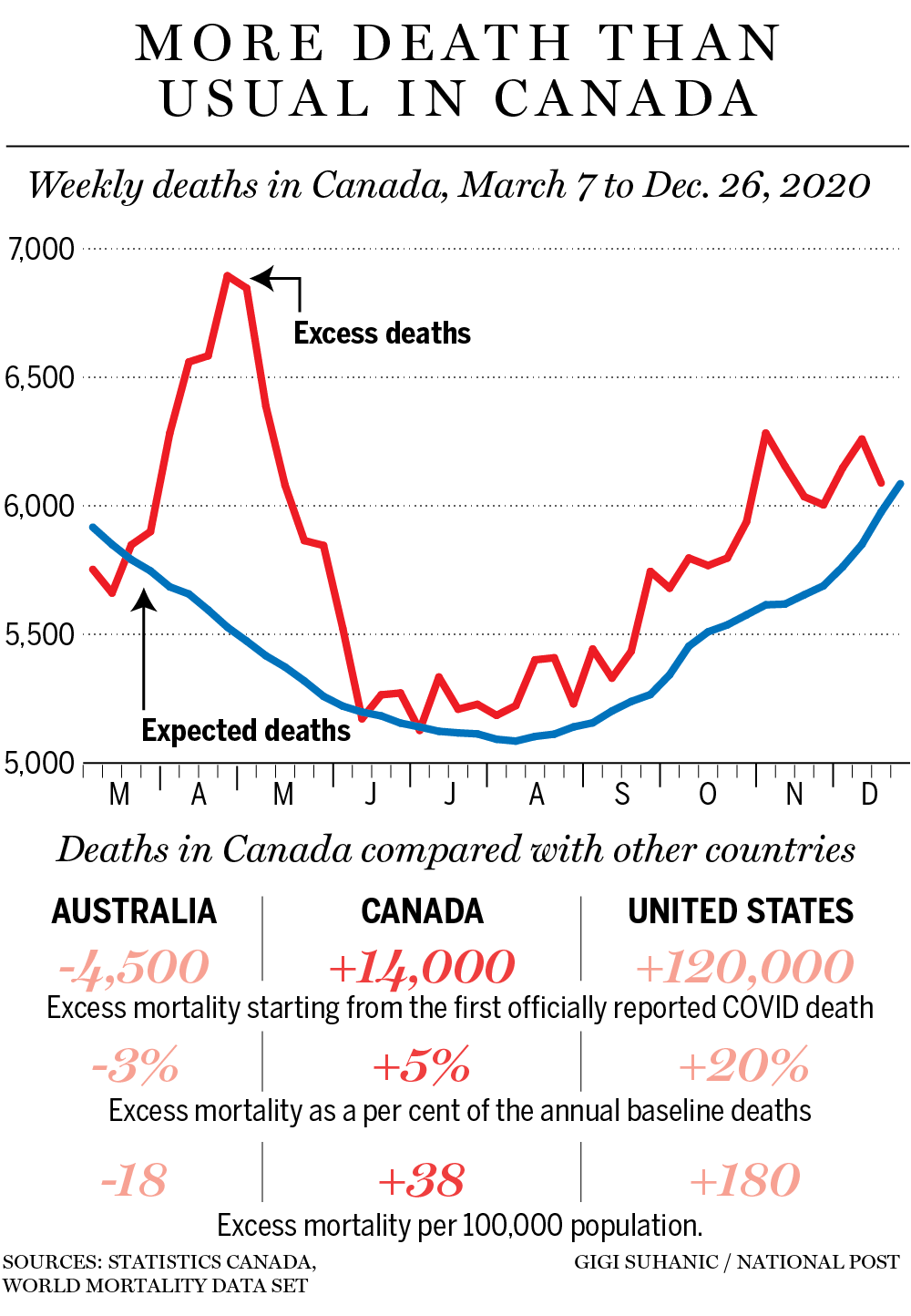 Canada saw about 42 excess deaths per 100,000 people by the fall of 2020, according to calculations from Ode’s team at Oxford.

Perhaps most interesting were the minority of countries that have managed to keep the coronavirus at bay with a variety of public health measures.

Australia saw a three per cent decrease in excess deaths in 2020, New Zealand a six per cent reduction, while deaths in Taiwan, South Korea and Singapore were flat or lower, according to Karlinsky’s list. His source data were slightly different than those used in the Oxford study, but all the excess death monitoring projects, including ones run by the Economist magazine and Financial Times newspaper, generally line up.

What seemed to work most effectively in those negative-death countries, Karlinsky said, were tight restrictions on international travel, followed by targeted lockdowns and aggressive contact tracing of the relatively few cases that got through.

“Probably the best and the cheapest policy you could have,” he said about tight border controls.

He said the range of excess deaths in other countries — like Canada and Israel — that had less-stringent measures makes it unclear how well those lockdown tactics work.

Denmark and Norway saw relative reductions in mortality, too, while neighbor Sweden, which famously eschewed strict lockdown measures, had 1.5 per cent more deaths than in recent years, according to the Oxford data. 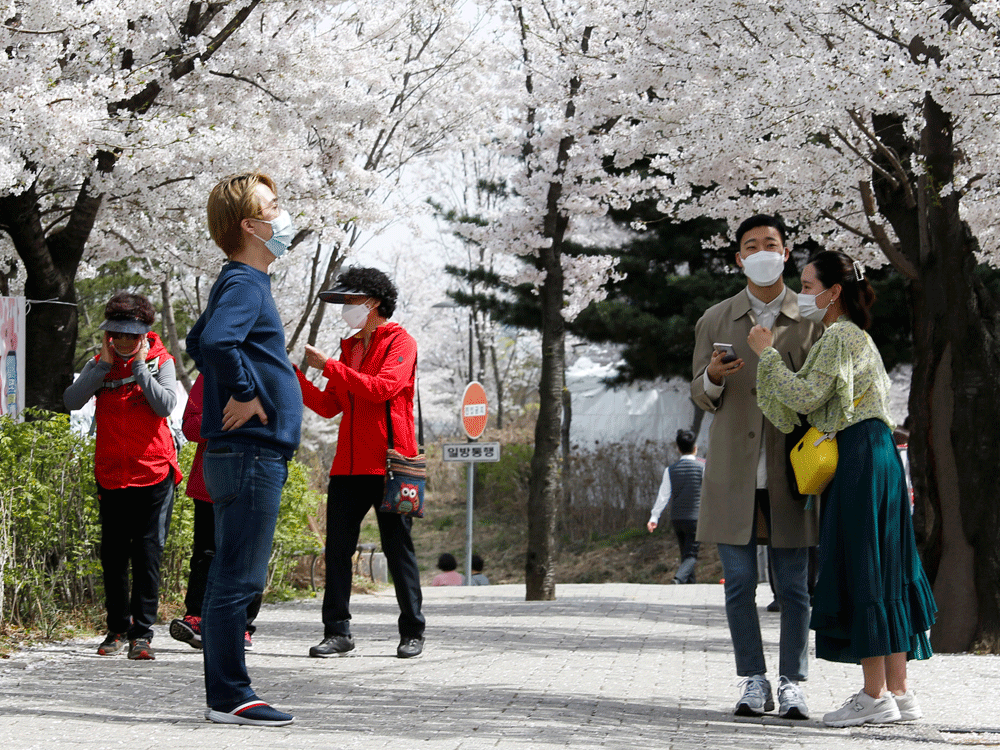 Beaney agrees that excess death data could help point out which policies worked best against the pandemic.

But he said they are a crude measurement that leave open-ended the cause of some excess deaths, or the reason for negative mortality in some countries.

He and other researchers say it’s likely that some countries with large gaps between the number of COVID and excess mortality are under-counting fatal coronavirus cases. Russia, for instance, has recorded 72,000 COVID-19 deaths and 425,000 excess deaths since the pandemic started, the Economist table indicates.

In some instances, though, the excess mortality may be from other causes, such as restrictions on health-care systems that deterred people from getting help for heart disease or cancer, said Beaney. Last month’s Statistics Canada report noted that both Alberta and B.C. had registered sharp increases in fatal overdoses in 2020.

And more research might show that relative reductions in deaths are due to factors such as cuts in air pollution and road traffic, said Beaney.

But there is little evidence of a major role, he said, for the “displacement” theory that’s popular among lockdown skeptics — the idea that some people who were about to die passed away just a little earlier because of the pandemic.

Meanwhile, researchers warn that the picture is not complete yet. As places like the U.K., with its robust vaccine rollout, are seeing the virus’s spread wane, others such as Canada and Germany are again suffering  an upswing in cases.

“It’s too early to draw conclusions about a league table (of countries’ excess deaths),” said Ode. “In six months … we might see a leveling up.”