There’s a weirdness to the situation Canadians find themselves in, says immunologist Dawn Bowdish. Just over a million people fully vaccinated against COVID-19 as of Thursday, 13.6 million partially, or half-vaccinated, and many millions more awaiting even a single shot.

“This situation, where people are sort of sitting in between doses, is really very unique,” said Bowdish, a professor of medicine at Hamilton’s McMaster University and Canada Research Chair in aging and immunity.

She understands the frustration with the void in public health advice about what’s safe behaviour, and what’s not, between COVID shots, or once fully vaccinated. “Do we need guidance? Yes. Would it be possible to make a blanket statement for the entire country with the level of heterogeneity and the (vaccine) schedules we have? Not yet. Not yet.”

Federal Health Minister Patty Hajdu has publicly promised that guidelines will arrive “shortly.” Canada expects to have enough COVID-19 vaccines, some 44 million doses, for first shots for all eligible adults by the end of June. (As of Wednesday, children as young as 12 have now been approved for the Pfizer-BioNTech shots.) Canada’s chief public health officer, Dr. Theresa Tam, recently said COVID restrictions, “like certain workplace and business closures,” could be lifted once 75 per cent of adults have had a first dose, and at least 20 per cent of those are fully vaccinated. As of Thursday, 36 per cent of the population had received one dose. Just three per cent have received two.

But with the number of people vaccinated each week growing, there’s new urgency to clarify what the vaccinated can and should not do. Meet indoors with other vaccinated? Let partially vaccinated grandparents babysit again? Get back to something that looks like life? Some of the federal government’s own COVID science advisors have been pushing behind the scenes for clarity for weeks.

In the U.S., the 100 million Americans now fully vaccinated — meaning, at least two weeks out from having received their second Pfizer or Moderna vaccine, or their Janssen (Johnson & Johnson) single-dose shot — may visit with other fully vaccinated indoors, without masks or physical distancing. The fully vaccinated can resume travel within the U.S., and refrain from testing before or after travel. Except for those living in congregate settings, most fully vaccinated individuals no longer have to be tested or quarantine if exposed to someone with COVID-19, as long as they are asymptomatic, “allowing them to go to work, take care of their families and continue their daily lives,” wrote the authors of a viewpoint article in JAMA, though they are being urged to continue masking in indoor public settings and to avoid large indoor gatherings.

In Israel, where more than half the population is fully vaccinated, a “green pass” vaccine program permits the inoculated access to gyms, hotels, restaurants, public swimming pools, live concerts and movie theatres. Masks are still mandatory in indoor public spaces, but an outdoor mask mandate has been lifted.

According to a Public Health Ontario evidence brief, no jurisdiction in the world with vaccination programs using the shots approved in Canada have said public health measures can be relaxed for the partially vaccinated. The effects of the first dose take weeks to develop, the briefing note states, “and is neither immediate nor the same as being fully vaccinated.”

Widespread coverage with a first dose would be sufficient to lower case rates, “thereby allowing reduction in population level measures,” the brief reads. However, at an individual level, relaxing public health measures for those ticking off the weeks or months between shot one and shot two is inadvisable, the brief states.

At the end of last month, Tam said that, with much of Canada in the grips of a third wave, it wouldn’t be safe for even the fully vaccinated to stop following COVID-19 measures just yet.

“I think our most important messages to be really clear to Canadians is that it doesn’t matter whether you had one dose or two doses,” she said. “At the moment please observe all public health practices because we’re in the middle of a big third resurgence and now is not the time to sort of let your guard down.”

But there is still no formal guidance beyond that. Some are wondering if Canadian health officials will say nothing changes until we reach some level of herd immunity. Given the significant delay between doses in Canada — up to four months — “clear communication on how to conduct oneself (between) shots from public health leaders would help,” Toronto critical care physician Dr. Michael Warner recently said on Twitter.

“We are seeing patients admitted to ICU with #COVID well after shot 1 and before shot 2,” Warner said, though he did not clarify how many people, what age, what shot or whether they had any underlying health conditions. 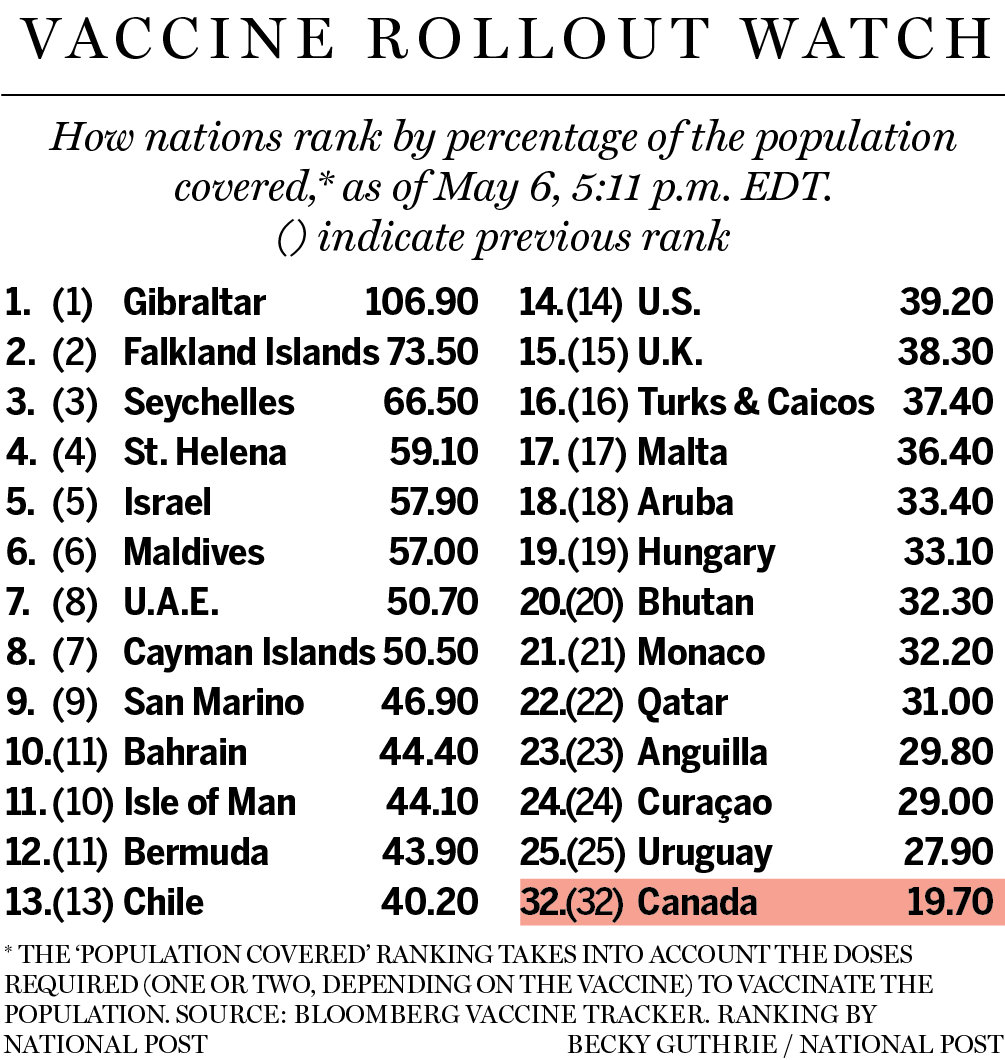 A recent Lancet study found a single dose of Pfizer-BioNTech’s vaccine was 91 per cent effective against hospitalization at 28 to 34 days post vaccination, while one dose of AstraZeneca was 88 per cent effective. The study was based on a mass rollout of first doses in Scotland between Dec. 8 and Feb. 22. The researchers didn’t attempt to identify a peak vaccine effect estimate for each vaccine, and lockdowns across Scotland could have resulted in potential biases, they noted.

Another recent study, a preprint from Public Health England

that hasn’t yet been peer-reviewed, found a single dose of either Pfizer or AstraZeneca’s vaccine cut a person’s risk of transmitting the virus that causes COVID-19 to others in their households by as much as half.

While Canada’s decision to follow the U.K.’s first-dose-fast strategy was “incredibly important” from a public health perspective, “it creates this situation of having a lot of people in limbo,” said Dr. Fahad Razak, an internal medicine physician and member of Ontario’s COVID-19 science advisory table.

In a country like the U.S., “you have to be able to tell people what to do when a third of your population is fully vaccinated,” he said.

“That’s why (the CDC) guidance is so clear. It was put out well over a month ago. For Canada, we’re looking at a very small number fully vaccinated.”

Still, it’s important to get guidance out there, he said. “I think what concerns me is that there is confusion out there that one dose gives you enough protection that you can start to change behaviour, and there is no evidence to suggest that is true.”

There’s more variability between people after one dose than after two doses, in terms of the amount of immune protection, he said. Certain groups — older people, people with cancer and the immunosuppressed — will get significantly less protection after just one dose. “We don’t have enough science to tell us what, specifically, people can do safely after one dose,” Razak said.

But guidance is lacking even for people who have had that second booster dose, and while variant-driven fires are still burning in Ontario, Alberta and other parts of the country, we shouldn’t wait until we get to the U.S. numbers of fully vaccinated, Razak said. “There is a real possibility that starting July, August, when cases numbers should be down, that we’re going to have a significant opening up of society,” he said. Yes, be transparent that one dose isn’t enough to change behaviour, Razak said, “but ‘here’s what happens with two doses.’”

“I think the pandemic has really highlighted the concept of risk for people, and the reality of the spread of the pandemic means that some level of risk is probably going to persist for a very long time,” he said. “How long? We don’t know.”

“After your first dose, you are protected from hospitalization and dying, which is a wonderful feeling,” she said. But Ontario isn’t anywhere near where it needs to be in terms of case counts, she said. “Having partially vaccinated people socializing without masks would be disastrous for spread.”