CALGARY — For one of the rare times in his life, Randy Chevrier was at a loss for words. A man who has spent his life speaking in paragraphs, delivering soliloquies to every question, was silent, no quip at the ready.

A cancer diagnosis will often render mute even the most loquacious individual.

The St-Léonard native and McGill University graduate who went on to a 16-year professional football career in both the NFL and CFL, felt a lump on his neck last year but was reluctant to see a doctor — understandable, considering he never missed a game because of injury, played hurt and avoided the athletic therapist’s office with great regularity.

This time, however, Chevrier knew it was more serious. Following a biopsy, he was told he had a tumour below the jaw that must be removed through surgery, ensuring it hadn’t spread. Chevrier was told by his doctor the tumour probably was 80 per cent malignant.

Surgery was performed last December, Chevrier grateful it wasn’t delayed or cancelled because of COVID-19. He didn’t experience sadness, anger or despair at the time, just a sense of calm. Nor did his life flash before his eyes, although this 45-year-old single father of three boys, naturally, worried about their future.

“The biggest thing I’m an expert in is resilience and having a positive attitude,” Chevrier told the Montreal Gazette. “But that positive attitude can be both a blessing and curse. I’ve passed through this threshold of life where I don’t mourn things at the same speed as others. You can wallow and say ‘this sucks’, or you can say, ‘hey, this is the reality. It does suck, but it’s not the end’.

“There’s strength and beauty in tragedy and pain — if you find it.” 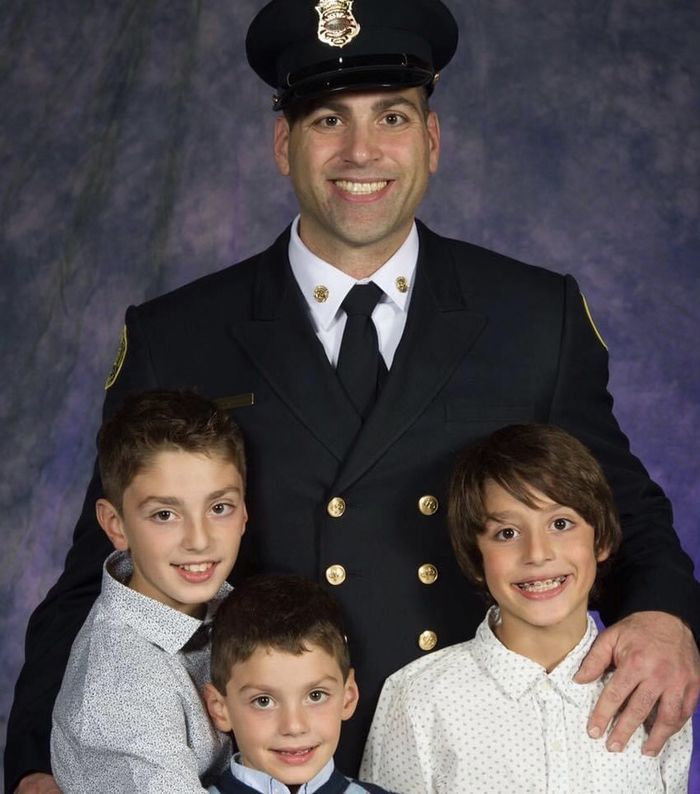 Fortunately for Chevrier, he did. The tumour was benign and Chevrier has resumed his job with the Calgary fire department, where he works in community safety after three years as a firefighter. It’s a day position, four times per week, handling outreach, education and fire safety, his responsibilities taking him to schools or seniors’ residences, about fire prevention.

Chevrier initiated the transfer from the fire hall, seeking a better balance between work and life, ostensibly for his boys, aged 10 to 14. “I’m enjoying some boredom for now,” he said. “I haven’t had boredom in years.”

There’s no better understatement for a life that has been filled with twists and turns, danger and harrowing experiences, not to mention the numerous career hats he’s worn.

“Talk about a life- and psyche-altering, trauma-inducing event,” Chevrier said. “Blessed or cursed, early on I’ve had to deal with major life-upending issues.

Drafted by two teams in 2001 — the Jacksonville Jaguars selected the defensive tackle in the seventh round, while Edmonton took him fifth overall — the 6-foot-2, 270-pounder played for the Dallas Cowboys and Cincinnati Bengals before returning to Canada, most notably known for his 11 seasons with the Calgary Stampeders.

Chevrier came out of McGill having won the J.P. Metras trophy, awarded annually to the best down-lineman in U Sports. Instead, his on-field exploits might be best remembered for his duties as a long-snapper.

But Chevrier always was determined to be recognized for more than being a player, and used his platform as an athlete for community-related work. He never said no to a worthy cause.

He was the Stamps’ spokesman and representative for the Canadian Cancer Society. He was also a prominent advocate for PinkPower — the team’s annual program to raise funds and awareness in the battle against women’s cancers, something close to his heart since Chevrier’s mother survived breast cancer. In addition, he has run anti-bullying and leadership programs, serving as a motivational speaker.

Chevrier has taught school and sold real estate, but never felt fulfilled until becoming a firefighter in 2017. Along with putting out blazes, Chevrier has responded to medical emergencies — anything from heart attacks to car accidents, even shootings. He has had victims die in his arms while attempting to perform CPR.

“You don’t say it’s part of the job,” he said. “You think about it. Sometimes it sticks with you. But it’s like football. You have to move on to the next play.”

Chevrier doesn’t mean to sound callous or lacking empathy. He understands why so many of his colleagues are dealing with post-traumatic stress disorder. But he also realizes how fulfilling the job was and can be.

“We go to see people on the worst day of their lives and try to make it a little bit better,” he said. “When those tones go off (for a fire), it’s like you’re running out of the tunnel for a game.”

While his new position might seem mundane, Chevrier’s role can’t be understated. The education he provides is vitally important and offers the potential of “one less person a firefighter might have to rescue or pull out of a fire,” he said.

'The first time this has happened in cancer': Tumours disappear in every rectal cancer patient

Despite the small sample size, the results of the drug trial are groundbreaking, offering hope also for the treatment of pancreatic, bladder and stomach cancer.

Does a cancer diagnosis raise the risk of diabetes?

Certain specific kinds of cancer appear to increase the diabetes risk, according to a new study.

SHIFT: The impact of illness in a family is immeasurable

Taya Jones, a single mom of three living with ALS, would never have chosen this road for her or her family, that they are on it together, offers the rest of us inspiration, hope and for parents, the realization that...